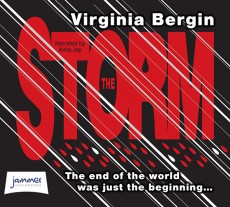 With the killer rain still falling from the sky, teenager Ruby Morris has to survive in a hostile world.

Three months after the killer rain started to fall, teenager Ruby Morris is still struggling to survive in the tattered remnants of the world she once knew. Strangers are more likely to be enemies than friends and allies. Dead bodies lie rotting in the streets and in their homes. Ruby is still living in a house pervaded by the stench of the decomposing corpses of her mother, step-father and baby brother, existing on tinned food and bottled water, unable to drink tap water or use it to wash.

To help her survive, Ruby has broken into the public library in her local town in Devon, mugged up on clouds on the ‘know your enemy’ principle and practically devoured an SAS ‘how to survive’ manual, although by the end of it all, Ruby could teach them a thing or two about how to survive in a hostile world.

When Ruby ends up roaming the countryside again, in the company of an old school friend, she finds herself back at the sinister army camp on Salisbury Plain where she last saw Darius Spratt and the strange, silent child known as The Princess. But it’s not long before Ruby wants to escape from there – something that turns out to be a lot easier said than done.

The Storm, and its sequel, The Rain, paint a convincing portrait of a world where people will do anything to survive, even down to pleading for their own foot to be cut off after accidentally dipping their toe in a pond. The really chilling thing is that in Ruby Morris’s world, there’s even someone willing to swing the axe.

Ruby is at times a rambling, almost irritating narrator, more often than not fixated by how she looks and dresses, in a sometimes jarring counterpoint to the horrors of a post-apocalyptic world that gives The Day of the Triffids a good run for its money. But she’s also tough, resourceful and, at times, very funny. She’s matured from the first book, and her relationship with Darius Spratt is starting to mature as well. Her substitute swearword, by the way, is now bug, rather than butterfly, but you can always add in the expletive of your choice!

I was thoroughly caught up in Ruby’s story on several long car journeys. We even galloped at speed straight from The Rain to The Storm, wanting to know what happened next to Ruby and her friends and Virginia Bergin’s sequel certainly didn’t disappoint. Anita Jay delivers the perfect Ruby, rushing through her rambling monologues, barely drawing breath. She only falters on the voices of the men and boys, all of whom come over uniformly nasal, but that’s a small price to pay for such a standout performance on the main character. This is Ruby’s story, and she tells it in her own inimitable style.