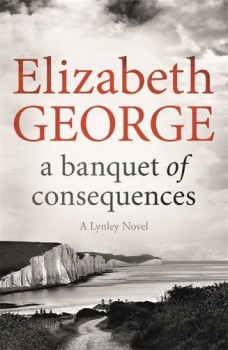 A Banquet of Consequences

A well-known feminist is found dead in a hotel room by her PA. Her editor is subsequently found almost lifeless by DS Barbara Havers. Barbara needs a successful case in order to put off her imminent transfer to Berwick-on-Tweed.

Will and Charlie are the sons of Caroline Goldacre, PA to a well-known feminist writer Clare Abbott. When their girlfriends leave them chaos ensues: Will commits suicide and Charlie appears to be heading for a breakdown. On top of this Caroline, travelling with Clare on a lecturing assignment, finds Clare dead in the adjoining hotel room.

Meanwhile, DS Barbara Havers has to put up with an attempt to get rid of her from the police unit. On a rare occasion when she is allowed out of the office she finds Clare’s editor, who she is supposed to interview at her home address, in a near lifeless state. She persuades Inspector Lynley, her immediate boss, to let her take on the investigation to get herself back into favour with the Detective Superintendant.

Some of the descriptive passages in the book conjure up detailed pictures which help to establish the atmosphere of the setting in rural Dorset. Villages such as Cerne Abbas and the bakery where Caroline lives with her partner Alistair are described in minute detail at various points. Although the novel is rather long, these passages do have their place.

The story has a slow start, but this is partly due to the need to set the scene for each of the characters. Why there is a need for a date at the start of each chapter is a mystery as after a while the story takes place along a normal timeline. There are some lovely bits of humour in this first part of the book: Lynley's responses to the department secretary’s attempts to give Barbara a make-over; Zimmer frames at Liverpool Street station; and Dorothea’s attempts to find out about Barbara’s previous life. However, in the later chapters the storyline becomes quite dark and depressing.

Barbara, having always been eccentric in this series of books, is now is made out to be rather stupid. Her choice of food, for example when she attempts to cook a meal for her colleague, is just too far over the top. This is a shame as her eccentricity was always part of the charm of the Lynley novels. It is also worth questioning the way in which this colleague, Inspector Winston Nkata, is referred to on several occasions. If the characters themselves are meant to be offensive in their language then it needs to be made clearer in the text that the thoughts described represent those of the characters, however unlikely.

This is a long book with a well-constructed and complex storyline, interweaving the intricacies of the criminal activity with the on-going attempts to rehabilitate Barbara. It is very readable but the subject matter is at times rather grim.