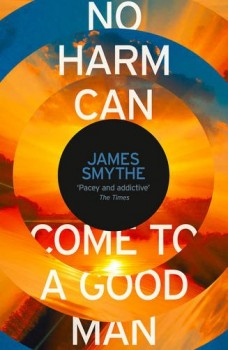 No Harm Can Come To A Good Man

Senator Laurence Walker is set to win his party’s nomination for President until a family tragedy, followed by what appears a rogue prediction from the mathematically-based algorithm on which America has come to rely, sparks a dramatic collapse.

This powerful and chilling story of mental destruction is all the more effective and realistic because it is set in the near future - and is horrifyingly believable.

Senator Laurence Walker, a dedicated family man with a successful author wife and three children, looks as if he is his party’s favourite son and clear favourite in the long and complicated build-up to nomination as their candidate for the Presidency. He is a consummate politician. His profile is near perfect for a Democrat nominee: a man of the people and war hero, not too far to the left and not too close to big business.

But in an increasingly risk-averse nation, where life is dominated by an intelligent computer programme which uses an algorithm gathered from data mining to predict the future and come up with likely scenarios for success in almost any action, whether personal or career-based, it’s inevitable that he should seek the likelihood of his chances through the ClearVista programme.

Walker’s life changes when personal tragedy strikes, but what comes next is really shocking as he, his family and those around him fall apart in what appears a totally possible and all too believable way.

Former computer game writer Smythe has a talent for developing the personalities of his characters and transforming them into actions that will shock while remaining true to their core. His spare writing is immediate and close to the bone, yet his subjects are fully developed and their environments well drawn.

The media circus surrounding presidential candidates and the almost unbelievable invasion of privacy they face is savagely exposed. Where do you draw the line between knowledge and absolute destruction of personal life?

In a present day world increasingly dominated by reactions, often completely arbitrary, whipped up by social media, and the perceived need for ever more sensationalism, where virtually our every action can be traced to build up a profile of our lives available to almost anyone at the touch of button, he sounds a grim warning.

The ‘science’ of prediction is already a big thing in America, but how reliable is it and should a prediction shape the future? Can a computer differentiate?

This is a bleak, slow-burning, claustrophobic story of humanity’s inability to cope with the relentless march of technology, told through one man’s family, and it should be heeded. This world is not so far removed from our own, and it’s coming.