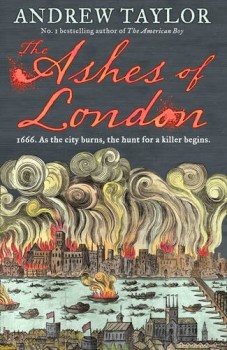 The Ashes of London

The body of a murdered man is found in the ruins of St Pauls after the Great Fire. Minor civil servant James Marwood, son of a Protestant extremist, is dragged into treacherous waters where he crosses the path of a determined, but vengeful young woman.

This is both a chilling murder mystery and a transporting historical novel. If it opens a little slowly, the pace soon picks as the reader is engaged by the copious detail which is Andrew Taylor’s hallmark. The year is 1666, the setting London. The monarchy has been restored, but old hatreds die hard. Absolute Puritans may be older but are no less fanatic, particularly the ‘Fifth Monarchists’ – a group proscribed even by Cromwell – who still seek to destroy the king whose father they executed to pave the way for ‘King Jesus.’

The Great Fire has destroyed the city from the Tower to the Temple, even its centrepiece, St Paul’s, succumbing to the flames. As damage clearance begins, a body, one of many in the fire’s debris, is discovered. This one is different. He has been killed by an expert assassin with his thumbs bound behind his back.

Enter the story’s two main protagonists. James Marwood is the son of a Republican, who lost everything when Charles II regained the throne. Catherine Lovett is daughter of a regicide – one of that small circle directly involved in the trail and execution of the king’s father. Both are affected and their actions shaped by forces beyond their control. She is a spirited teenager who dreams of becoming an architect and escaping an unsatisfactory marriage her aunt and uncle have arranged. Marwood, the son of another old puritan, is a minor civil servant whose only desire is to live down his notorious name and make his way in the world. When Cat is raped by her cousin, she tries to kill him and is forced into hiding.

Marwood is the better-drawn; everyman, trying to do right, trying to advance in the world while being unwillingly dragged into murder, plots and political secrets. He relates much of the always believable action in the first person and his gentle, sometimes frustrated, relationship with his dementia-affected father provides a touching counterpoint to the world of envy, self-seeking, debauchery, machinations and brutality in which he finds himself.

Catherine’s story is told almost entirely in the third person, which I thought rather a shame. She is the stronger and more ambiguous character, surprisingly modern in both outlook and reaction to adversity.

Taylor’s beautiful use of language, fine historical backgrounding – many readers will find more than a nod to the diaries of one Samuel Pepys – make this a clever and consuming tapestry of a book which draws you into a complicated, but in the end very simple, story. He has a fine feel for the political uncertainties of the period and the complexities of relationships both in the court and among London’s prominent citizens – aided by the introduction of several prominent historical figures.

The historical detail never manages to detract from the parallel stories of the two young people and good overall characterisation – not even the truly wicked or despicable feel exaggerated or caricatured and belong of right to the world Taylor has created for them.

It’s a heavyweight piece and solid historical fiction, if perhaps not Taylor’s finest. The ending, although tying these events up in a perfectly satisfactory style, still felt slightly open, like a sequel might be in the offing.