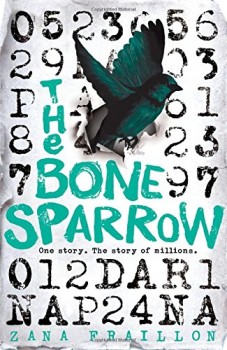 Subhi has spent all his life in a detention centre, but then one day, something unexpected happens. Someone breaks into the camp, not out of it.

Subhi has spent all his life in a detention centre. He measures his height by the number of diamonds in the fence that keeps him penned in. His life is ruled by the men in jackets, and Subhi knows that the nice ones never stay long. His mother has given up and lies, comatose, in the tent that Subhi shares with her and his older sister.

His only friend, Eli, is deemed too old for the enclosure reserved for families and is forcibly uprooted to live in a sector with other men, young and old, despite the fact that he’s still only a teenager. At night, Subhi escapes from the filth and squalor of the camp and dreams of freedom and the sea, believing that the sea brings him special treasures.

But for all the extreme poverty in the camp, Subhi has learned to read. When Jimmie, a girl from the poor neighbourhood nearby finds a way through the encircling wire, bringing with her a book written by her mother, Subhi is able to read it to her. Subhi is fascinated by the bone sparrow that Jimmie wears around her neck and, as he reads the stories in the notebook to her, together they explore the world beyond the camp.

The Bone Sparrow is a heart-rendingly beautiful story of what it is to grow up in a world that barely even acknowledges your right to exist, preferring to keep human beings penned up in conditions that would have the world complaining if animals were treated the same way. The writing is simple but elegant, always in keeping with its main characters. Subhi narrates his side of the story, and the book changes to the third person to tell Jimmie’s story.

The refugees in The Bone Sparrow are based on the plight of Myanmar’s Rohingya people, an ethnic Muslim minority in a predominantly Buddhist country, considered by the United Nations and Amnesty International to be one of the most persecuted people in the world. But when thousands of men, women and children exist in refugee camps everywhere, official and unofficial, fleeing from wars and unrest, The Bone Sparrow could speak for any of them. For those who have had Channel Tunnel crossings disrupted, this book might provide some idea of the conditions the refugees in the unofficial camps outside Calais are experiencing, and maybe then some people won’t be so quick to condemn and vilify.

The Bone Sparrow ends on a note of hope, but there are millions for which that hope has yet to become reality.