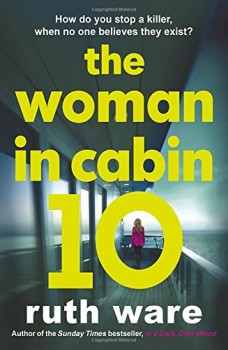 The Woman in Cabin 10

Travel journalist Laura ‘Lo’ Blacklock finds that no one believes her story when she claims to have heard a loud splash and seen bloodstains during a luxury cruise.

There’s something thoroughly spooky in stories where someone disappears without trace and almost everyone claims they were never there. I was scared witless when I was younger by a film where the hero’s wife and child had disappeared – and even the room was different. And as for the original version of The Lady Vanishes, I was watching parts of that from behind the sofa.

The Woman in Cabin 10 features that current crime fiction fad (and one that’s certainly not new) of the unreliable female narrator. But this is a decidedly more engrossing read than Gone Girl or The Girl on the Train. Ruth Ware may be going for that old chestnut of a locked room mystery, but she handles it with panache.

Laura ‘Lo’ Blacklock is a journalist on travel magazine Velocity. She’s given what could be her big chance – a freebie luxury cruise on millionaire Sir Richard Bullmer’s new boat Aurora. But she’s not in great shape when the holiday begins – she was attacked when someone burgled her flat, then she managed to fall out spectacularly with boyfriend Judah.

Lo’s a long way down the pecking order, so her cabin isn’t one of the super-duper grand ones. The press party has its usual variety of weird and wonderful hacks, including an old flame of Lo’s. And of course they all seem to drink like fish.

You just know it’s not going to end well when Lo meets the strange young woman in cabin 10 and borrows mascara off her. Later that night she hears a loud splash and sees a smear of blood on the window. Except, everyone is present and correct on the boat, cabin 10 is empty and no one believes her story.

The book feels a touch disjointed at times, particularly near the end, but Ware really ramps up the tension, and varies the pace nicely. The reader is never sure what’s going on in Lo’s drink and drug-addled brain, and Ware has some very crafty sleights of hand along the way. You may not end up liking most of the characters, but if you’re like me, you want to know what happens to them.