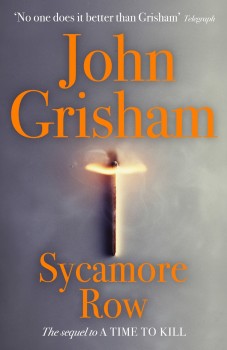 When a reclusive multi-millionaire businessman with terminal cancer hangs himself, he leaves a hand-written will cutting out his family and leaving the bulk of his money to his black housekeeper. Jake Brigance is appointed to represent his estate, provoking a controversial trial and forcing Ford County to face its unsavoury past.

They say never go back – it can never be the same, but almost 25 years after the publication of A Time To Kill, John Grisham is back where it all started for him in the courtroom of the small Mississippi town of Clanton. And America’s favourite author triumphantly proves the doubters wrong.

I was among many critics who thought that Grisham was fraying at the edges, that his later work was lacking the insight and the humanity which made him so successful, that fame and wealth had blunted that driving force for social justice which set him apart from the rest. But in this stunning sequel to the book which made his name, Grisham is right back at the top with what is probably his most convincing and compelling work yet.

Little has changed in Ford County in the three years since lawyer Jake Brigance took on the hopeless case of Carl Lee Hailey and fought the ingrained racial prejudice and the power of the Ku Klux Klan. Burnt out of his home by the white supremacists, he still feels their threat, carries a pistol in his briefcase and welcomes the regular checks on his wife and young daughter by his friends in the sheriff’s department.

A reclusive and wealthy local businessman commits suicide to avoid the agonies of terminal cancer – and leaves a handwritten will, cutting out his own family and leaving his entire estate to his black housekeeper. A covering letter appoints Jake his attorney and when the man's worth is assessed in the multi-millions, the vultures from families on both sides and the legal profession gather to battle over the fortune. A tense and dramatic court case follows, exposing modern prejudices and forcing Ford County to face its sordid and tortured past.

Most of the major players from the first book reappear, a little older, a little more set in their ways, some a little more drunken, some showing surprising humanity, as the story races to a conclusion. The new protagonists, the housekeeper and her bright and ambitious ex-soldier daughter, are totally believable and their deep fund of common decency merely highlights the greed and selfishness of their opponents. As always, the courtroom drama, its sometimes dubious tactics, its surprises, its ambushes and its often grinding background slog is convincingly and brilliantly portrayed.

At his best – and this undoubtedly is – Grisham is an intensely moral writer. Brigance may represent all that is best in American law and the country as a whole, but it is the glaring contrast with the deep-seated prejudices and the slick, get-rich-quick opportunism of his opponents that makes this assured, sometimes deeply moving and always beautifully written and engaging book so special.

The author’s name alone will ensure this enters the best-seller lists worldwide – but this one will be there on merit, a fine work by the absolute master of the legal thriller.