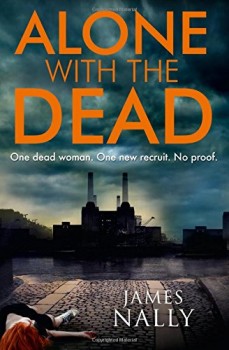 Alone With The Dead

Rookie PC Donal Lynch is one of the first on the scene of a brutal murder. The investigation quickly stalls, but the murdered woman herself is determined to make sure her case isn’t forgotten.

Donal Lynch is a rookie PC in London. The year is 1991 and Donal is doing his best to forget the circumstances that led him to leaving Tullamore in Ireland and moving to England. After a series of dead-end jobs he joined the police and since then has been pounding the beat in London.

The job suddenly gets a lot more interesting when Donal and his partner, the cynical, lazy Clive, are first on the scene of a young woman’s murder. Marion Ryan is found stabbed to death in what was clearly a frenzied attack. Donal has to deal with her distraught husband Peter and his work colleague Karen, and later that night, he has to deal with Marion herself, when the dead woman turns up when he’s getting intimately acquainted with yet another bottle of red wine in an attempt to bludgeon his chronic insomnia into submission.

Yes, that’s right, Donal Lynch sees dead people. He’s also got a convicted murderer for an ex-girlfriend and a journalist brother who’s always sniffing around for a good story. That’s probably quite enough complications for any young cop to have to deal with, but then he adds the case of a woman being harassed by her ex-boyfriend to an already volatile mix. It’s not long before Donal gets a big break when he’s co-opted onto the murder team by Detective Superintendent Dan Shepard, drafted in to try to shake up the stalled investigation into Marion Ryan’s murder.

Normally I’m all over anything with a supernatural angle like a rash, but I must admit that in this case, James Nally failed to convince me. In many ways it was easier to believe that the grossly unethical would-be psychiatrist that Donal was seeing was right about the causes of his sleep disorder than it was for me to believe that he was seeing a ghost, despite the somewhat laboured back-story that Nally was at pains to set up.

Alone With The Dead lacks the genuine creepiness of Phil Rickman’s books and doesn’t quite hit the same note of menace that James Oswald is capable of pulling off. The frequent digressions into Donal’s past history had a nasty habit of all too frequently slowing the pace to a crawl. His boss, ‘Shep’, was straight out of a central casting that seems to owe a lot to The Sweeney and, frankly, it’s hard to understand how Donal even manages to be still in a job by the end of the book.

All in all, Nally’s debut was more of a plod than I’d expected, and never quite seemed to hit its stride, but maybe Donal Lynch will find his feet a bit better when he’s not quite so bogged down in his own backstory. There was enough here to tempt me back if he does return, but if that happens, it would be good to have at least some likeable characters in the book, an area in which Alone With The Dead was unfortunately distinctly lacking.