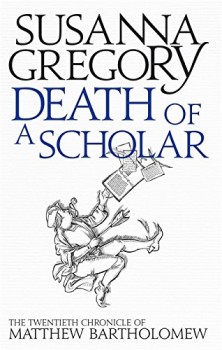 Death of a Scholar

Once again Cambridge is full of murdered clerics and scholars. Physician/detective Matthew Bartholomew and Brother Michael must sort out their latest mystery.

The 20th Matthew Bartholomew mystery, once again loosely based on historical fact, merely serves to remind us why cop-turned-academic Susanna Gregory is at the top of her chosen tree. As always, Gregory’s impeccable research, combined with a well thought-out plot line, a real sense of drama and leavened with wit and humour, allows her to paint a completely realistic picture of 14th century Cambridge – both town and growing university – with all its rivalries and struggles.

This latest story is set in the autumn of 1358. Matt and Brother Michael, the university’s senior provost, have returned from Peterborough after solving the disappearance of its abbot to face a growing storm.

They find a town in turmoil. A new college has sprung up, backed by a court official, its Fellows already antagonising the established institutions. Matt’s brother-in-law, clothier Oswald Stanmore has died and his books show he was not the respectable businessman he appeared. More deaths follow, both Fellows and members of the charitable society Stanmore helped found, colleges and private homes fall victim to a spate of burglaries – and Matt runs into trouble when he ‘resurrects’ a notorious criminal.

All this gives Gregory the opportunity to introduce new characters – the Fellows of the new college, a new apothecary, the new vicar of St Mary’s and a string of students – all of varying degrees of unloveliness.

True to Bartholomew’s earlier adventures, the plot has more twists and turns than a country lane and I defy any reader to come up with the full answer before the lengthy riotous denouement which reveals a host of nefarious characters and their motives.

As always the investigations of the unlikely pair of detectives are hampered by inter-college rivalry. Theological debate – in this case the concept of apostolic poverty – again rears its head. Such things were taken seriously in 14th century educational circles when reactions were often violent.

Of even more import, Brother Michael is forced to confront his church’s ban on dissection to prove the innocence of a Michaelhouse Fellow – and face possible excommunication for the sake of justice.

At the heart of the story, as the University goes to war with the town and itself, lie the basics of most crimes – greed and personal advancement. “It is common knowledge that if you want a college to prosper, you should appoint a villain to mind its coffers,” says it all.

Death of a Scholar is another success for the unfailingly philanthropic Matt and the slightly less altruistic Michael. And it’s another winner for Gregory and her extraordinary ability to paint a really believable portrait of an age long gone – and somehow knit it together with a gripping crime mystery.