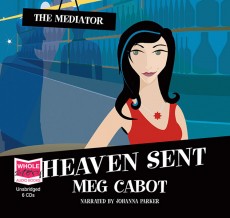 Paul Slater is determined to change the past and make sure that Suze and her boyfriend Jesse never meet. Suze is equally determined to stop him.

Sixteen-year-old Suze Simon is a Mediator, which means she has the ability to see, hear and touch ghosts. She’s also going out with one; California’s hottest dead guy, Jesse de Silva. Jesse died 150 years ago and remained tied to the house in which he was murdered, living in what was to become Suze’s bedroom when she moved there from New York, following her mother’s re-marriage.

Suze should be over the moon now that she’s finally going out with Jesse, even though she can hardly introduce him to her family and friends, but fellow mediator, Paul Slater, who hasn’t taken rejection well, is determined to throw a spanner in the works by using his powers as a ‘shifter’ as well as a mediator, to go back in time and save Jesse’s life. As the result of that will mean that Suze never meets Jesse in ghost form, that aim isn’t quite as altruistic as it might sound, and Suze is equally determined to stop him.

I’ve followed Meg Cabot’s Mediator series right from the start with Shadowland, also known as Love You To Death, published under Cabot’s pseudonym of Jenny Carroll as long ago as 2000. Heaven Sent, which I read as Twilight, a US import, was published four years later. When I discovered the books were also available on audio, I was like a rat down a drain, galloping through them on several long car journeys to and from France and other places. Narrator Johanna Parker is pitch-perfect as sassy, sparky Suze, and on top of that, makes the transition to sexy Jesse with ease, something that few narrators can pull off with such polish.

In Heaven Sent, Suze has to face up to a heartbreaking decision: whether to save her boyfriend’s life at the expense of her own happiness. I was as hopelessly overinvested in their romance now as I was 16 years ago. The pace mounts inexorably to a tense crescendo in a burning building as Suze’s love life takes a distinctly unexpected turn.

This is a fitting and satisfying end to the series. But in an unexpected turn of events, it also marks the beginning of a new chapter for Suze and Jesse, with the publication of a new adult novel by Meg Cabot, Remembrance, which picks up their story several years later. I hope that makes its way out on audio as well and to say I can’t wait to read their further adventures is an understatement.