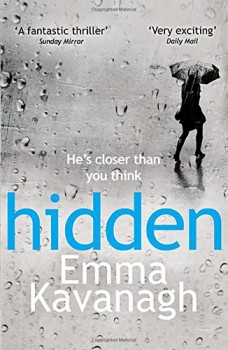 A gunman stalks the wards of a hospital. Two members of a police firearms unit assigned to find him are recently reinstated after being investigated for shooting a teenage boy. The third has his own problems. As the stress mounts, death is only the pull of a trigger away.

Emma Kavanagh brings an interesting background to her writing. For ten years she trained police and the military in the psychology of life-threatening situations, teaching them to interpret their thoughts and responses and also to understand the point of view of their target to help them predict his or her possible actions. She calls on her experience for this taut and dark psychological thriller which revolves around how people respond to stress and how some responses can provoke tragic consequences.

The complicated story is set in Swansea, but could be anywhere. It opens with a welter of blood and death as a gunman kills innocent bystanders in a hospital cafeteria before being himself shot dead. From this brutal start, described in detail by a local paper crime reporter who is present, the story is told, often in the first person, present tense, by some of those involved in the denouement. Sounds complicated? Only if you fail to realise that the events spread over six days preceding the shooting are in no sort of chronological order.

Kavanagh navigates her way through this potential nightmare with skill, signposting the time and the character moving the story forward from their own point of view at the start of each chapter. This device allows her to disguise the identity of the disturbed gunman until the very end, with some of the story told from his viewpoint and the reveal providing a complete surprise, cloaked by a series of well planned and executed disguises and red herrings.

Much of the story revolves around three members of a police firearms unit, two of whom have just returned to duty after investigation over the shooting of a teenager who is now in a vegetative state. All three are under pressure in different ways, exacerbated by reports of a gunman stalking the hospital where the boy is being treated.

Kavanagh’s main characters are all linked, some more tenuously than others, but together they move the plot forward at a hectic pace. And to complicate the issue, she introduces several detailed sub-plots, somehow all germane to the action, to follow.

Charlie, the female crime reporter, also investigates the death of her childhood friend, Emily, apparently run down while wandering drunk on the M4 motorway, but Charlie suspects her death was no stupid accident but may be linked to the boy in Ward 12. The other major narrators are Imogen, half of a twin – cue an interesting sidebar into the relationships of twinning – who is a psychologist at the hospital and Aden, a member of the armed police team.

It’s clever, complicated and the characters are completely believable and the brief background descriptions of life in depressed South Wales horrifyingly real. Once you get the hang of the changes of character, time and sometimes tense, this is a first class and riveting read.

If some of the writing seems a little over-blown and repetitive, it serves to further build the tension towards what is an inevitable, but nevertheless explosive ending. Kavanagh is an original and interesting addition to the genre.