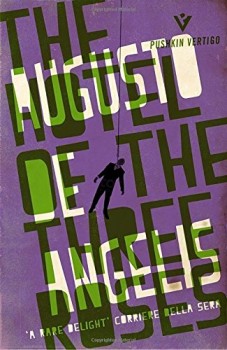 The Hotel of the Three Roses

Commissario Carlo De Vincenzi receives an anonymous tip that a crime is to be committed at a louche hotel.

Augusto De Angelis is considered the father of the Italian ‘giallo’ crime genre of the late 1920s and 30s, so called because of the books’ yellow covers. He was a novelist and journalist, and detective Commissario Carlo De Vincenzi was his most famous protagonist. The series was enormously popular in Italy, but after criticising the Mussolini government, he was imprisoned. Shortly after his release in 1944, he was beaten by a Fascist thug and died from his injuries.

The cultured De Vincenzi is in every sense a modern detective, despite the immediate post-First World War setting. He is focussed on motive, believing that will lead to the killer. His personal circumstances are vague, except he is young for his rank, is new to Milan and lives alone with only a housekeeper.

What you get instead is an almost forensic explanation of how his mind works. This is no calculating machine like Holmes, no thud and blunder heavyweight like Marlowe. De Vincenzi is every inch an Italian, combining passion with logic and never losing his compassion.

The shady hotel of the title is home to a louche assortment of drunks, gamblers and degenerates. Tipped off by an anonymous letter warning of an imminent outrage, De Vincenzi’s arrival is followed by the discovery of the body of one of the guests found hanging in the stairwell.

As he and his team investigate, more deaths follow and he uncovers a Gothic and grotesque story linking most of the guests to each other. With some of them summonsed for the reading of a substantial will, this has almost the air of a country house mystery. But the story is much darker, with its roots in a horrendous crime committed during the Boer War, tales of revenge, all the suspects withholding information to protect their own secrets – and a prime suspect who no one has ever seen!

And what part have three garishly dressed porcelain dolls have to play in it all? This is essentially a plot-driven novel – an old-fashioned puzzle with the detective reliant on his wits and his questioning and persuasive powers. It is masterly handled with small amounts of information revealed to keep the reader guessing and enough turns and twists to baffle. If it has a fault, it’s occasionally in the modern translation – I can’t imagine there were too many paramedics around in 1919!

This is an intriguing story ideal for readers who like good, old-fashioned mysteries. It will take you a while to get into a tale which seems to fly off in all directions, but having done so, you won’t want to put this clever and smoothly written novel down.

De Angelis was as good as other European writers in the genre in the 1930s and the publishers should be congratulated for bringing his work, and that of the other authors in their stable, to the attention of a wider readership.