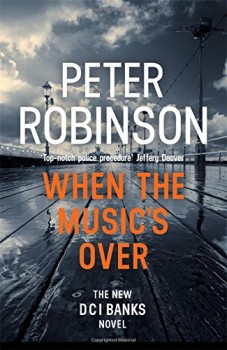 When the Music's Over

Almost everything about Peter Robinson’s Alan Banks series is efficiently and quietly understated. It’s a series that’s worn well and shows yet again that it still has a sturdy pair of legs, even 23 books into the series.

DI Annie Cabbot, meanwhile, has a grim task – trying to identify the body of a young woman who has been badly beaten up and thrown from a moving van on a remote country lane. The case takes both her and DC Gerry Masterson into the middle of a fractured and fractious community.

It’s obvious that Robinson’s been reading the newspapers when it comes to his two storylines. And perhaps, given truth is stranger than fiction, that’s why the book feels a tad flat in places, as we’ve seen the real-life dramas.

But it does allow Robinson to do what he does well, and that’s quietly unfold a believable story. He’s been ill-served by the TV adaptations of the books, with a woefully miscast Stephen Tompkinson as Banks (the latter most certainly isn’t big and shouty and free with his fists). The television lot want wham-bam action and non-stop drama, which these books don’t have. What they do have, though, is the realistic feel of the police piecing together an investigation, with all the attendant legwork, frustrations and lucky breaks.

Both threads seem tied together a touch quickly, although it’s an entirely plausible resolution to the sex abuse cold case. But if you’re a fan of this series, and are also terminally bored with maverick cops and their tangled private lives, When the Music’s Over provides a snapshot in the working lives of Banks, Annie and the gang.