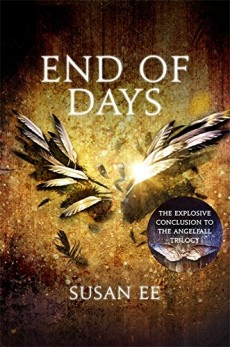 The war between the angels and the remnants of humanity reaches a suitably explosive climax.

In End of Days, Susan Ee builds her Angelfall trilogy to an explosive climax. I shamelessly devoured her first two books in one sitting. I’m a sucker for apocalypses at the best of times, and one where the Archangel Gabriel gets machine-gunned out of the sky over Jerusalem was right up my street – or rather my rat-infested alley.

The book takes off where World After ends, with 17-year-old Penryn fleeing from the war between humans and angels in the arms of her companion and protector, Raffe, a rebel archangel whose snow-white wings have been cut off and replaced with black, bat-like wings taken from the demon Beliel, the implacable enemy of both Penryn and Raffe.

I think anyone who’s not read the two previous books will struggle with End of Days, at least to start with, as it’s very clearly the third book of a trilogy rather than a standalone with drip-fed back story. Here, Ee very much assumes a familiarity with what’s gone before and an audience who has gone straight from one book to the other. But if you haven’t read Angelfall and World After, remedy that immediately as apocalypses really don’t get much better than this one.

The angels are militant, violent and utterly amoral. Human beings are there to be hunted to extinction and in addition are subjected to hideous experiments of the sort practiced on Penryn’s younger sister, Paige. It’s hard not to feel revulsion for what is still, at the heart of it all, a tortured child, but one that has to feed on others to survive.

End of Days is darker than both of the earlier books, and Ee doesn’t pull her punches when it comes to describing the war raging between the angels, sent to wipe humanity from the face of the earth, and the beleaguered, vastly outnumbered resistance fighters.

The book lives up to the promise of the rest of the series. For me one of the strongest passages was Penryn and Raffe’s somewhat surreal trip into Hell to liberate Raffe’s fallen Watchers so they can fight alongside their former boss and the ragged remnants of humanity. The backstory Ee gives Beliel, in particular, is heartrending and utterly fitting.

Readers invested in the slow-burn relationship between Penryn and Raffe won’t be disappointed. That changes and deepens in the course of the book, and Raffe spends more time at the heart of the action that he did in World After. For me, this was a dark but satisfying conclusion to a young adult trilogy that has kept me utterly engrossed. The final battle was cleverly handled and provided a suitably nail-biting finale in which I wouldn’t have put a bent penny on anyone’s chance of survival.