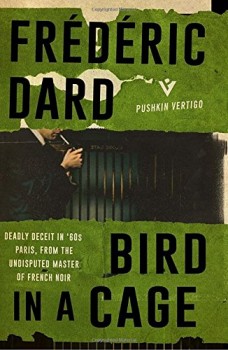 Bird in a Cage

It is Christmas and Albert Herbin, after a long time away, is visiting his old home in one of the poorer parts of Paris. He meets a young and attractive woman in a brasserie and begins to feel hope for the future.

Frédéric Dard, not well known outside France, is a writer greatly influenced by Georges Simenon. He has written more than 200 novels/novellas and is a master of the dark, psychological thriller. This book certainly falls into that category.

The resemblance to Simenon is noted in the first few pages as Dard describes in some detail the down-at-heel quartier in which Herbin was brought up and is now revisiting many years later, following the death of his mother. The atmosphere is entirely that of Paris. There is the same old woman cleaning the stairs in his apartment block, cursing as she does so.

It is Christmas and the streets, the delicatessens and cake shops are all busy. Herbin is quite clearly very depressed and tries to recapture some of the sensations of his youth by visiting one of the local shops that sells virtually any item that can turn a profit. Just for the sake of doing what he used to do as a boy, he buys a silver cardboard birdcage.

He next finds himself in a brasserie, choosing that particular one because his family had never been able to afford to eat there. He notices a woman with a small child and then we learn that his own wife, who resembled this woman, had died. He is instantly attracted to her and thus there begins a very strange relationship, with the woman turning out to be somewhat mysterious and not at all as he had anticipated.

But if she is mysterious, even more so is the series of events that follows their meeting in the restaurant. Inexplicably, objects seem to appear and disappear from her flat and Herbin is completely bewildered. Furthermore – and for no reason that he can possibly imagine – the woman suddenly begins to take against him and makes no secret of her desire to have him gone from her flat. However, he is so intrigued by what is happening and so infatuated with her that he can’t bring himself to leave the area, even when she insists he leave the building.

Eventually he begins to understand why her attitude to him has changed and he realises that her motives, like everything else connected with this bizarre adventure, were not as he thought. By the time he begins to understand what has been going on, however, he has become involved in a frightening, potentially fatal situation – one from which there is only one possibility of rescue, though whether it will be forthcoming is at least doubtful.

It is a tribute to the quality of the writing that Dard can contain so much tension, surprise and mystery in so few words. However, he can still afford the time to establish a convincing setting. The opening chapter in particular, in which nothing apparently happens, nevertheless leads us to feel that we are on the brink of some extraordinary happening. It is this feeling that keeps us reading intently and with such fascination.