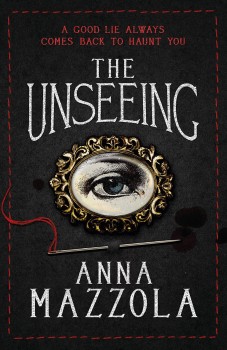 In 1837 Sarah Gale was sentenced to hang for her part in her murder of another woman. An idealistic young barrister is appointed to determine if the sentence is appropriate.

Criminal solicitor Anna Mazzola has plucked a case from history for her debut as a novelist and this intricately woven and cleverly plotted piece of ‘faction’ is as good an explanation as you’re ever likely to get of one of the 19th century’s most infamous crimes.

In 1837, Sarah Gale, a seamstress and single mother of a four-year-old son, was sentenced to hang for her role in the murder of Hannah Brown on the eve of her wedding at the house in Kenningon Gale had previously shared with her former lover James Greenacre. Brown’s body was crudely dismembered with a wood saw and bits were distributed at a building site on the Edgware Road, the Regent’s Canal in Stepney and Camberwell’s Coldharbour Lane.

The so-called Edgware Road Murder was the sensation of the time. From the start the London newspapers speculated wildly without regard to the facts – and continued to do so throughout the couple’s trial and while awaiting sentence to be carried out. Police traced a sack used to wrap Brown’s legs to Greenacre. When he was arrested, Gale was with him at the house where he had installed Brown. When she was arrested Gale had items said to belong to Brown in her possession. Greenacre was charged with murder, convicted and hung, but throughout insisted that Gale had not been involved in any way.

Gale continued to deny any knowledge of the killing and dismemberment, but offered no other defence, was found guilty of aiding and abetting and sentenced to death. Home Secretary, and twice Prime Minister, Lord John Russell, a civil liberties champion, rejected her petition for mercy, but under pressure from influential society members, including the formidable Mrs Elizabeth Fry’s Society of Quaker Women, did commute her sentence to transportation for life. She died in Australia in 1888.

So much for the facts, brilliantly researched and presented by Mazzola with few additions or alterations. The questions of the thoroughness of the police investigation, and the disappearance of evidence and statements in such a high profile case are as familiar today as in Victorian times. But Gale’s insistence on silence allows Mazzola to re-examine the case through the eyes of idealistic young barrister Edmund Fleetwood, appointed by Russell to give an opinion on whether the original judgement was sound and should stand.

Edmund has his own problems, having struggled all his life against a controlling and often brutal father and has more than a share of self-doubt. Yet he is determined to find the truth and the answer to the question of how can it be someone would go willingly to their own death?

Sarah refuses to help him, neither lying nor explaining the evidence, but continuing to protest her innocence. Edmund knows she is hiding something, and must discover why she’s maintaining her silence.

This is a carefully woven tale of trust, self-trust and deceit against a background of abuse, domination and brutality. Mazzola offers an intriguing heroine, but no conclusions as to her guilt or otherwise. She says she has no answer other than Sarah knew far more than she ever revealed – and leaves her readers to make up their own minds if they can!

What this beautifully written and cleverly plotted story does do is present a genuine mystery in the grittily realistic setting of Victorian London, with its filth and horrors, high society and low life, hypocrisy and brutality. The scenes inside Newgate Prison are quite horrendous. This is a stunning and intriguing debut.