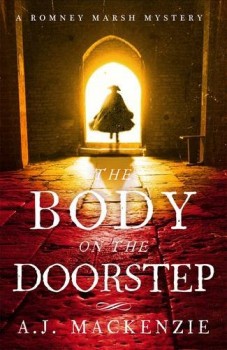 The Body on the Doorstep

Reverend Marcus Hardcastle is pickling himself in beer and port in a lonely parish on the Romney Marshes. When a man is shot on his doorstep, he is plunged into a plot involving espionage, treason and betrayal.

Smuggling has always been big business. In 1796, with increased duties on imported luxuries to pay for the escalating war with the French Directory, it was a way of life for whole struggling south coast communities.

But the romance of Kipling’s Smugglers’ Song: “Brandy for the Parson, ’Baccy for the Clerk; Them that asks no questions isn’t told a lie – Watch the wall, my darling, While the Gentlemen go by!” hardly tells the hard truth of it.

Local people, either actively involved supporting the smugglers, or just turning a blind eye, also knew of the bloody, often fatal battles between the so-called Gentlemen and the rival Customs and Excise services. England, with just 30 miles of water separating it from the pre-Napoleonic French armies cutting a swathe through Europe, is alert for signs of invasion. The smugglers also provide a cross-Channel route for agents and information for both sides.

This is the setting picked by the Anglo-Canadian husband and wife team writing as AJ Mackenzie to launch their Romney Marsh mystery series – and they have exploited it to the full. The Body on the Doorstep is a clever and gripping atmospheric page turner, with engaging and believable characters, plenty of twists and turns, nicely observed historical detail and touches of gentle humour.

Reverend Marcus Hardcastle, one-time rising intellectual star of the Church, brought down by his own failings and now slowly losing himself in beer and port in the parish of St Mary in the Marsh, is plunged into a plot involving espionage, treason and betrayal after a man is shot on his doorstep.

He is aided by the widowed Mrs Amelia Chaytor. A woman years ahead of her time, she is bright, independent, daring, athletic, a crack shot and brilliant horse handler, but also socially aware and compassionate – a sort of crinolined Emma Peel to his none-too-elegantly dressed and irascible Steed.

Together they make a wonderful team. From what little they reveal of their back stories, it is clear that there is much more to come. And the setting of the bleak, Romney marshes, with their winds, fogs and air of savage desolation provides a perfect background to an old-fashioned and rumbustious tale.

Without the benefit of DNA, fingerprinting and forensic science, databases and the dubious benefits of modern policing, they must solve a series of crimes with a marked political dimension by no other means than careful observation, a willingness to listen and an application of sharp intelligence.

The characterisation throughout is superb. The artist JMW Turner makes an interesting and sympathetic appearance and even the minor players appear authentic and individual. The background is impeccably presented and the pace picks up as the story progresses. If the showdown owes more to Christie than Le Carre it is nonetheless in keeping with the overall tone of a quite brilliant and traditional period novel.