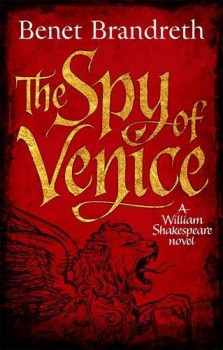 The Spy of Venice

Caught in a seduction too many, young William Shakespeare flees Stratford. He falls in with a band of players, but others have their eye on the young wordsmith. England’s survival is in the balance and soon he is sent to Venice as part of a crucial embassy – and into deadly danger.

The Bard as Bond? Surely this is the strangest 400th anniversary tribute to the world’s greatest playwright! Unbelievable? Hardly, given the panache with which self-confessed would-be Renaissance Man Benet Brandreth attacks his debut.

Brandreth works in the intellectual property sphere, is also an expert on Shakespeare and a rhetoric coach who works regularly with the Royal Shakespeare Company. He has written and performed for radio and the stage and his one-man show, The Brandreth Papers, was a sell-out at the Edinburgh Festival and in London. If that’s not enough, he was twice World Public Speaking champion, is a qualified instructor in Filipino martial arts, a stage combat choreographer – and the son of the irreverent wit, TV personality and ex-MP Gyles and brother to author, editor and journalist Saethryd!

He melds that background into an inventive, suspenseful and ebullient romp, which once you get over the shock of the original idea, is filled with wonderful dialogue, clever wordplay, packed with allusions to Shakespeare’s work – and largely and very deliberately – set in the Elizabethan home of international intrigue that was the Republic of Venice.

Bored and caught in one seduction too many, young William Shakespeare flees Stratford. He falls in with a band of London players, but others have their eye on the young wordsmith and soon he is sent to Venice as part of a crucial embassy – and into deadly danger.

As with all Elizabethan dramas, the real life background of Protestant England’s undeclared and ongoing war with the mighty Spanish Catholic empire provides the realistic setting for low plots, high adventure, escapades and escapes as Will struggles to deliver vital information to the ruling Signoria council of Venice.

Strong characters, a fast-moving and interesting plot and some good set-piece scenes, plus Brandreth’s stylish writing will keep you guessing to the very end. The women are beautiful and sparky, the villains, particularly the Genoese nobleman, Giovanni Prospero, as nasty as any.

If there is a slight failure, the author makes use of the Venice gag – think Merchant of Venice, Baker of Venice, Tailor of Venice, and so on a shade too often and keeps killing off his characters just as you get  know them! But overall, the story is thrilling, surprising, funny and occasionally moving. The relationship between the young, often brash, Will and the ageing, overweight, vain, boastful and cowardly Oldcastle, who spends much of his time drinking and living on stolen or borrowed money, is especially memorable ­– and owes a great deal to the scenes between Falstaff and Prince Hal in the Bard’s Henry V.

If you’re a Shakespeare fan, if you love the English language and clever word play, this is a unique and compelling thriller. The Spy of Venice is a spectacular opening to a series which fills in those missing years between Stratford and The Globe with plenty more Elizabethan high jinks!