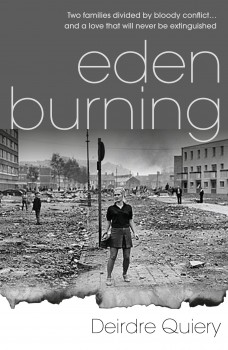 A story of love amid the violence and death of the Troubles, centred on two families on either side of the sectarian divide, who share a dark secret.

Deirdre Quiery grew up in Belfast during the Troubles. In her debut, centred on two families on opposing sides of the sectarian divide, she writes of people trying to live a ‘normal’ life in the shadow of the riots, bombs, executions, retribution and reprisals. But in the Belfast of 1972 I remember, nothing was ‘normal’ – and that is the fatal weakness of the story.

Her attempts to get inside the minds of people with unswerving belief in warped ideologies passed through generations, or those few who refused to allow their backgrounds to destroy their humanity, somehow fall short when viewed through a 21st century prism of ‘emotional intelligence and mindfulness.’

On one side of the divide are William and Eileen and their sons Cedric and Peter. William and Cedric use a taxi business as cover for murder in the Protestant cause. Eileen knows nothing about this and asks no questions, but Peter, who hopes to become a doctor, is being dragged into an endless series of killings. On the other side are Catholics Tom, Lily and Rose, burned out of their home – and with Rose now a target for the father and son who kill for no other reason than their warped view of history and religion.

A terrible secret lies behind this conflict as the families move towards a denouement in an atmosphere of escalating violence. A complicated and unconvincing narrative time-jumps between 1970s Belfast and the dreadful Easter blitz of 1941 in which almost 1,000 died, 1,500 were injured and up to 100,000 of the city’s population lost their homes.

There is almost too much detail. Eating habits, furniture, dress, home and pub life detract from the narrative. Some of these descriptive passages would have benefited from being thinned out. There were also passages where the back stories of characters were so heavily handled as to become quite confusing. Near-metaphysical descriptions of finding ‘a moment of silence into which would creep a deep peace’ became repetitive.

If this is intended to show the disorientation people must have felt, it succeeds, but distracts from the main story. The love story between the Catholic girl and the British soldier also needs far more development. The ending is not so much improbable as unbelievable.

Finally, the editing does nothing at all for this novel. There are literals throughout the text and statements presented as fact, particularly surrounding the Easter Blitz and the British use of tanks on Belfast streets, which could have been avoided by a simple reference to Google!

‘The Troubles’ were a time of mindless savagery, fear and misery on both sides. In the end little more than political pragmatism led to the Good Friday agreement, but sporadic violence still continues. To try to explain this away by the latest trend in liberal thinking was an exercise doomed to failure. Others may find this novel inspiring, I did not.