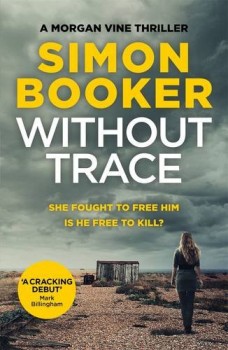 Morgan Vine has campaigned for the release of her childhood sweetheart, who was found guilty of murdering his step-daughter. Once he’s free, though, the doubts set in …

Morgan Vine is a struggling journalist living in an old railway carriage on the stony Kent coastline at Dungeness. She has a good reason for being there and for running a reading group at the local prison – her childhood sweetheart is banged up for murder.

Danny Kilcannon was found guilty of murdering his 14-year-old step-daughter Zoe. His wife Rowena also disappeared and hasn’t been seen since. Morgan has campaigned staunchly for Danny’s release, claiming he is innocent. When he’s released from prison, though, her daughter Lissa disappears and Danny’s behaviour gives her serious cause for concern.

Without Trace is bound to draw comparison with the wretched Gone Girl – but if you’re as bored as I am with copycat domestic noir and unreliable narrator comparisons, don’t worry – this debut novel is a very impressive lead-off to what looks to be a series.

Yes, there are concerns about Morgan’s state of mind, but it’s handled with subtlety, and she’s a tenacious lead character amidst a sea of awkward people, including dodgy journalists and defensive police. Booker captures well the tension between Morgan and her brattish teenage daughter, who has no qualms about playing mother off against rich daddy in California. Morgan herself is scraping along trying to make a living by cleaning for people in the area and with occasional journalistic assignments

Without Trace makes full use of the spooky landscape around Dungeness, with mists and the nuclear power station dwarfing everything. I could picture it to perfection, having visited there to see filmmaker Derek Jarman’s house on the stark shingle beach.

The book flags a touch at times with Morgan and Danny’s teenage backstory. But Booker is adept at cliff-hangers and some crafty misdirection. And he produces with a flourish one heck of a twist – no, make that a triple twist with three and a half loops – at the end.