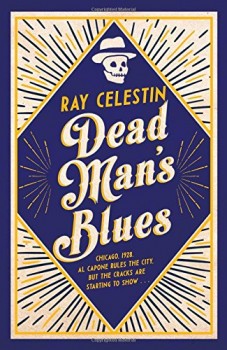 A group of Chicago city leaders is poisoned; a white gangster found dead and mutilated in a poor black area; an heiress vanishes. Pinkerton detectives Michael Talbot and Ida Davis must find the links between the three events which threaten to shake America’s most corrupt city.

This second part of Celestin’s vastly ambitious and totally brilliant story of jazz and the American mafia in the middle 50 years of the 20th century has enough pulsating rhythm to rival anything from Louis Armstrong’s six-strong Firehouse Five at their vibrant and swinging best. And Armstrong, the New Orleans correctional home boy who made his name with bands like Kid Ory and Fate Marable, is again a key player in this violent mystery set in the Prohibition Chicago – America’s most racially divided and corrupt city – in 1928.

He, and the story, have moved on from Louisiana and his appearance in Celestin’s debut, The Axeman’s Jazz, which won him the CWA John Creasey New Blood Dagger Award. Armstrong has abandoned his cornet for the trumpet and established himself as a top soloist and band leader in a city totally dominated by the mafia.

As rival ‘outfits’ run by the increasingly unstable Al Capone and the psychopathic ‘Bugsy’ Moran prepare to go to war over domination of the city’s multi-million dollar booze and prostitution trade, Armstrong struggles not be to be drawn into the conflict – and to perfect his own musical style against a background of racism which bars him from a white audience. But the great Louis is not the only character to link the two novels. Pinkerton detectives Michael Talbot and Ida Davis, the main protagonists of the earlier book, also return.

At the height of that year’s stifling summer they are hired to find a missing heiress by the girl’s troubled mother. It proves harder than expected to find a face known across the city – and what are the links to the poisoning of a group of corrupt city leaders and the killing of a white gangster found dead and mutilated in a poor black area?

Ida again turns for help to her childhood friend Armstrong, the bridge between the two faces of Chicago. While the corrupt police take little interest in the gangster killing or the mass poisoning, crime-scene photographer Jacob Russo can’t get the dead man’s image out of his head, and begins his own investigation.

Meanwhile ‘Dante the Gent’, New York rum-runner and fixer Dante Sanfelipe, is summonsed back to Chicago by Capone, who suspects a traitor in his ranks. But Dante is struggling with his own problems as he returns to a city he never thought he’d see again.
As all three parties edge closer to the truth, their paths cross and their lives are at risk. Once again Celestin has produced a clever and utterly believable and suitably grisly tale, set in a brilliant and vibrant historical background. Even the title is in keeping.

Dead Man’s Blues was written by the legendary guitarist and drummer ‘Scatman’ Crothers, who from the age of 14, pioneered the scat style later adopted by Armstrong and played in Mob ‘speakeasies’ before joining ‘T-Bone’ Walker and Armstrong in the late 1920s.

Celestin’s Chicago is a truly nasty place, riddled with corruption, racism and organised crime and driven by the throbbing rhythms of the ‘negro’ music of blues and jazz, now beginning to appeal to a far wider public. All this – coupled with the gradual switch of emphasis by the mafia from booze and whores to hard drugs – forms a compelling sub-text to a story which brings the city to throbbing life.

The ungarnished and often deeply unflattering descriptions of the people and the town again make this a memorable and compelling read. A mixture of hectic pace, casual brutality, social comment, historical detail and moments of surprisingly genuine humanity drive it to a brutal denouement absolutely in keeping with what has gone before.

If you’re a jazz fan, this superb story is a must. If you’re interested in the history of the influence of organised crime on today’s American society, it’s compelling. If you just want a brilliant crime story that keeps you totally riveted, you won’t put this fast moving masterpiece down.

But Chicago is nearing the end of its heyday. Armstrong, and the saga, will move on to New York in the 1940s. I can’t wait to see what Celestin makes of one Francis Albert Sinatra!