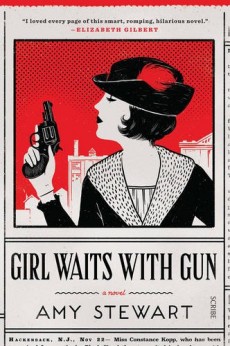 When their buggy is demolished by a badly-driven automobile, Constance and her sisters demand compensation. The driver refuses, and initiates a campaign against the trio, using mob methods to intimidate them.

Constance lives with her sisters Norma and Fleurette on a farm in New Jersey. One day in 1914 the sisters take their buggy into Paterson, the nearest town, and only narrowly avoid serious injury from collision with a car driven by Harold Kaufman, the rich scion of silk-dying factory owners.

Kaufman is clearly at fault but sneers at Constance’s demand for compensation. When she persists, he begins a campaign against her, Norma and Fleurette, initially by verbal assaults. However, when Constance elicits the help of local Sheriff Heath, Kaufman uses his mob friends to step up the pressure, throwing bricks through their bedroom windows with messages threatening much worse.

The girls will not be intimidated, and only too aware of the limited manpower at his disposal, the sheriff issues them with pistols to protect themselves. Constance not only exchanges fire with an intruder, but also pursues another matter relating to Kaufman’s bad behaviour: the disappearance of a child he has fathered on one of his oppressed employees. To get justice Constance and her sisters need plenty of stomach for the fight, especially when the legal machinery is loaded in favour of the rich.

This charming story is built on the foundation of a true case, with many of the names involved being real persons. At this distance in time, however, Stewart’s tale relies on her skill as an author to put flesh on the bones, and this she does very well. The story is voiced by Constance in the first person throughout, who claims the focus of readers’ attention, but other participants in the drama, and the details of life at a different time, are also re-created inventively.

It is the three sisters who come across most strongly. Norma prefers birds to human company and is full of moral warnings delivered in the form of newspaper cuttings, often delivered by pigeon post. Fleurette is the youngest of the family, brought up in isolation for her own protection, and unlike her sisters displays a worrying enthusiasm for the outside world.

Much of the action takes place at the sisters’ home, a farm with few of what today would be regarded as essential facilities, and where the meagre savings of the girls have to be eked out by what they can produce themselves. By the standards of the day life is not exceptionally hard, but tough enough by modern standards. However, the qualities possessed by the sisters suggest that neither Constance nor Fleurette will remain in bucolic isolation for very long.