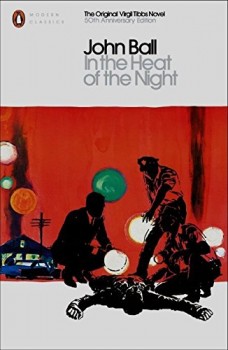 In the Heat of the Night

When a well-known musician is found robbed and clubbed to death in the small city of Wells, the first suspect picked up is black. The local police chief is embarrassed to discover the man is a homicide detective and reluctantly enlists his help.

With tensions between police and the black community rising across America and the Black Lives Matter campaign gaining daily strength, Penguin has picked the perfect time to re-issue John Ball’s brilliant debut short story which did more to influence race relations in the US than any single action since.

It was first published in 1965, a year of racial violence, with the Watts riots, the assassination of Malcolm X and the Alabama civil rights marches. Later filmed with Sidney Poitier and Rod Steiger in the lead roles, this iconic story which explores the underlying tensions of America’s south, and won a deserved Oscar for Poitier’s gripping performance in the role of urbane black detective Virgil Tibbs.

A musician is found dead in the main street of a small South Carolina town. In the Jim Crow atmosphere of the 1960s south, it’s hardly a surprise when the first suspect detained is a black. What is a surprise is that man is a homicide detective, passing through on the way back to work in California. Inexperienced local police chief Gillespie reluctantly recruits him to help with the case. Faced with growing local hostility and a police force seeming determined to see him fail, it isn’t long before Tibbs not only has to fight for justice, but also for his own safety.

The plot is comparatively simple without twists, rather, the slow unfolding of a murder case. The twist lies in the idea of an urbane, educated black leading a murder hunt in the Deep South and in Ball’s superbly created atmosphere of heat, racism and tension which you can almost touch.  This is a psychologically astute examination of racial prejudice, an atmospheric depiction of the times and a brilliant, suspense-filled read. Even after 50 years, you can feel the scarcely repressed anger and bigotry, but also the sensitivity of a story which then and now asks questions of both its characters and its readers.

It is a book which makes you stop to think whether things are better now than in the past. It takes you back to a time when skin colour was a key societal measurement of a man and how the law regarded him. Many, particularly in the Southern states, regarded African-American descendants of slaves as less intelligent, capable, or trustworthy – in short, less of a man.
Tibbs forces Gillespie and his officers to re-consider their prejudices, but given present events, has America changed that much?

In a thoughtful and carefully written forward to this new edition, John Ridley, the black screenwriter, director, novelist and producer who won an Academy Award for Best Adapted Screenplay for Twelve Years a Slave, makes the case that Tibbs, by today’s standards, could be seen as too much a ‘white man’s nigra’ – an ideal rather than a reality. That may be so, but he also calls the book: “A landmark among expressions of racial justice that retains its power . . . A resonant take on southern justice . . . that has had more lasting impact than works many times its size.”

Above all, it is a vision of hope. Hope that inspired Ball when he fought his editors to retain Tibbs’ skin colour – and hope that America and the world can shed the remnants of its racist past. Never has a short story more deserved the title of modern classic. If you haven’t read it, do so. It will open your eyes to some of what lies behind the news headlines and hopefully open your mind as well.