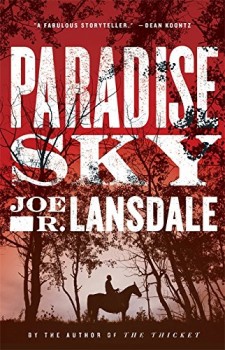 A young black man escapes lynching and is pursued across America’s south west by a vicious racist in a chase to the death.

Based loosely on the 1907 autobiography of America’s best known black cowboy, Nat – pronounced Nate – Love, this unvarnished look at the difficult transitional time following the civil war is hardly your bog-standard Western. It has all the normal ingredients: goodies, baddies, Indians, cowboys, soldiers, chases, lynchings, lawmen, love, revenge and redemption.

But Joe R Lansdale presents his rumbustious story in such a way that the reader is never allowed to become overburdened, for his folksy, occasionally grim, humour and clever use of language provides an often laugh-out-loud counterbalance. Love himself was a famous marksman and cowboy. At a Deadwood, South Dakota, Independence Day rodeo in 1876, he won the rope, throw, tie, bridle, saddle, and bronc riding – and the nickname of Deadwood Dick.

Lansdale’s protagonist is, like Love, born a slave in a South where white supremacist attitudes still dominate and black life is considered less valuable than a prime farm animal. He falls foul of a racist, but influential, property owner. On the run, his father murdered, his home burnt, he finds refuge with a very different white man who continues and expands his rudimentary education – including turning him into a crack gun hand.

When his saviour loses a fight with cancer, the young man changes his name in tribute to his mentor and becomes a Buffalo Soldier, a member of the legendary all-black 9th Cavalry and an Indian fighter. The massacre of his patrol sees him desert and make his way to Deadwood, where he finds work as a bouncer, meets the love of his life and develops and a kind of friendship with gunman and gambler James Butler ‘Wild Bill’ Hickok.

A shooting contest introduces him to a fellow sharpshooter and would-be author, who creates a ‘dime novel’ character based on his adventures. But the obsessive racist who began it all has continued to pursue him and, while failing to kill him, destroys his life yet again. A move to Dodge City sees him become a lawman – and with roles reversed the cat-and-mouse chase, which will end only when one is dead, continues.

This is a masterful full-blooded piece, one of Lansdale’s best, told with brilliant characterisation, unapologetic violence, humour and clever and authentic turns of phrase as the fictional Nat tries to set the record straight. As he says: ‘No-one likes the dull parts’– and there certainly ain’t any here! Paradise Sky is a complete winner and a story which will restore your faith in a frequently stereotyped and much abused genre.