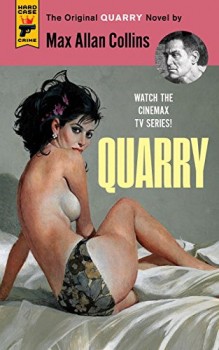 When successive contract killings go wrong, his partner is killed and he injured, Vietnam vet-turned-assassin Quarry loses trust in the ‘Broker’ who sets up his ‘jobs’ and sets out to deliver his own brand of justice.

Only in a morally bankrupt society could anyone envisage turning a killer-for-hire into a literary hero and sparking an endless wave of international imitators. Despite that, the prolific Max Allan Collins pioneered it. The man who has written ten hugely successful series featuring cops, private eyes and writers, been associated with scores of film scripts and TV scripts from Saving Private Ryan to CSI, turned his Vietnam vet, ex-Marine sniper into a 12-book money-spinner, now a TV series. This re-issue of the 1976 original will show you exactly how and why.

He undoubtedly leant heavily on Mike Hammer, the creation of his friend and later collaborator Mickey Spillane. Roughing off Hammer’s occasionally softer edges (!), he produced a psychotic, soulless, un-named killer, dubbed Quarry by his ‘booking-agent’ because he was: “Rocky and empty.” But it works: a contract killer who makes no apologies for his job. Somehow, you come to believe in the cynical, coldly professional Quarry and the pace and characterisation of the story draw you in.

Two jobs in the mid-West go wrong in quick succession and Quarry loses trust in both his agent and his ‘watcher’ partner. When the watcher is killed and Quarry himself is injured in a savage attack, he follows the tradition of all American crime heroes and goes off-script to discover who ordered the attack and deal out his own brand of justice.

That, in a couple of sentences, is the plot. But Collins, with his gift of combining believable, colourful low-life characters with a compelling level of complexity, suspense and sexuality, plus some clever dialogue and bags of action, welds the whole into a pulp-noir classic.

A bit of amateur detective work gives Quarry the leads he seeks and the story races to a violent and bloody finale, set appropriately enough, in a giant quarry, as he takes his revenge on those who have betrayed him.

Quarry is a morally inexcusable, unnecessarily violent and grim saga. But it’s an absolutely compelling and exciting read which shows how Collins leapt to the top of the tree – and how, like his friend Mickey Spillane, he has managed to stay there for so long.