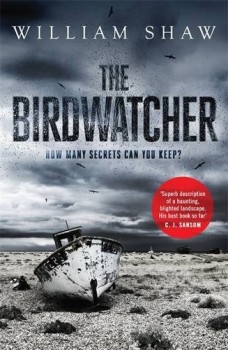 Sgt William South is happy with being a community bobby amidst the bleak landscape of Dungeness. And he has very good reason for not wanting to be on a murder enquiry.

Sergeant William South is perfectly happy with his community policing amidst the bleak landscape of Dungeness, which is dwarfed by the nuclear power station and shingle beach. And he has a very good reason for not wanting to be on a murder enquiry - he once killed a man.

But reluctantly he finds himself helping out newcomer DS Alexandra Cupidi, not long arrived from London with a brattish teenager daughter in tow. For the victim is South’s next-door neighbour and bird-watching mate Bob Rayner, who’s been battered to death and forced into a chest.

Enquiries uncover the fact that South actually knew very little about his friend. But he doesn’t believe it’s a cut-and-dried case when an Irish drifter is accused of the murder. That’s because South is from Northern Ireland, and has both a past he’s trying to forget and past history with Donnie Fraser.

Dungeness is clearly the trendy new setting for crime novels - I’ve had two in a week set on its rough, windswept beach. It’s certainly a place for generating the claustrophobic atmosphere, although the book makes equally good use of the supposedly peaceful and genteel middle-class estates.

I must admit that I’m getting pretty tired of flashbacks in crime novels, so it’s got to be a good backstory to keep me engaged. This one is adequate, although you won’t have to be Sherlock Holmes’ long-lost cousin to guess what happened. But Shaw really does capture the feel of the Troubles and what it must have been like to grow up amidst all the bloodshed.

South isn’t a character to jump off the page and grab the reader around the neck. But his past makes him what he is now - and there’s good use of Cupidi’s daughter Zoe to show just how isolated South has become.

The Birdwatcher is an understated book which never quite sparks into life. But it’s well-put together and has some genuinely dark moments as it progresses.