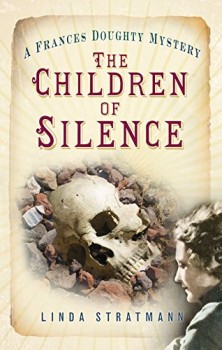 The Children of Silence

A body is found in the Paddington canal basin and a woman with a hearing impairment claims it is that of her husband, who disappeared three years before. She appeals to Frances Doughty, the lady detective, to help her prove her case.

Motivated and devious Victorian lady detective Frances Doughty is now in her fifth adventure. Bayswater-based Frances takes on the case of a woman with a hearing impairment who believes a part-skeleton found during the draining of the Grand Union Canal’s Paddington Basin is that of her missing husband.

Much of this fascinating, twisted and gripping mystery is almost cosy, as the unmistakeably middle-class Frances sips tea, politely nibbles sandwiches and plum cake – and applies her not quite impeccable feminine logic to a disappearance and at least two murders. But beneath a vividly detailed and absolutely convincing late Victorian surface – the dialogue is pure Jane Austen, the atmosphere at times positively Dickensian – Linda Stratmann manages to weave into the story a series of social messages.

The early days of the women’s suffrage movement, which increasingly appeals to a clever woman struggling to become accepted in a male-dominated society, get a prominent airing. So too does the debate over the dangers of smoking. But perhaps most important for Stratmann, a sufferer herself, is the attitudes of the medical profession to illnesses of which it has little knowledge.

She, along with the woman who seeks Frances’ help, is affected by hyperacusis – a drastically reduced tolerance to noise which, if particularly loud or high pitched, causes pain.The teaching of deaf children and the treatment of people with hearing disorders become major players, without ever slowing an intricate plot.

Family tensions, illegitimacy, the problems of thud and blunder policing and social inequality also have their roles in this cleverly constructed and beautifully written story – which has its roots partly in fact.

As Frances, with the help of her formidable assistant, minder, cook and friend Sarah, digs ever deeper to find the truth amid a web of lies, personal ambition, greed and misplaced loyalties, the plot thickens towards a surprising climax.

This is a book for those who like their crimes – and motives – complex and cerebral with much of the guts and gore off-screen, so to speak.

One thing worries me. At the end Frances catches the bouquet thrown by a bride! Does this mean this clever, independent woman is going to follow tradition? Somehow I don’t see her as a domesticated, comfortable housewife. And how the hell, in Victorian society, is she going to find a man enlightened enough to cope with her?