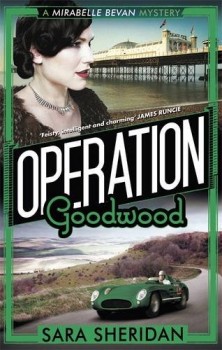 Mirabelle Bevan escapes a fire in her block of flats, but her racing driver neighbour is found hanged. When it is established he was murdered, Mirabelle investigates – and meets a wall of lies and evasion.

This is the latest in Sara Sheridan’s series of 1950s cosy crime noir mysteries featuring her ex-secret service heroine, Mirabelle Bevan. Mirabelle is rescued from a fire at her Brighton seafront home, but her neighbour, a dashing and young racing driver who she had been watching weeks before at the famous Goodwood circuit, is found hanging.

It soon becomes clear the blaze, which was deliberately set, did not kill him. What looked a suicide, becomes murder. Mirabelle can’t resist investigating and she discovers that Dougie Beaumont had many secrets, hidden by his international lifestyle. When a second murder takes place, her inquiries are blocked by Dougie’s well-connected and suspicious family and then by the official investigation – led by her would-be lover Superintendent McGregor.

With the help of Vesta, the organisational heart of the debt recovery service they run, and some of her ex-intelligence service connections, Mirabelle gradually unpicks the secrets of the glamorous racing driver – and discovers crime, corruption and a colonial insurrection all have a part to play.

As usual Sheridan’s research and scene setting is superb. ‘Naughty’ Brighton and the glamorous Goodwood circuit, where a young Stirling Moss was beginning to make his name, are lovingly and accurately portrayed. Her historical perspective is spot-on. The casual racism, and the treatment of women – many pubs would not serve a lone female – is as accurate as her descriptions of fashion.

Although this multi-layered story has murder and serious crime at its heart, Sheridan manages to convey both character, charm and even a certain sense of fun. Some readers may be put off by her overtly political stance – “Scratch a Tory, find a fascist ”– and her interpretation of Kenya’s Mau Mau insurrection owes more to emotion than fact. It is true that the overcrowded, insanitary detention camps were a lasting blot on what was perhaps the last, and worst, example of British colonial rule, but the insurgents also contributed their share of misery – notably hacking to death with pangas a six-year-old boy and his family and murdering thousands of their own Kikuyu people either in faction fights or because they supported the British. Hundreds more simply ‘disappeared’.

Whatever your views, they should not put you off what is a clever, well-written and quite believable story of detection by a determined and intelligent woman years ahead of her time. I am sure Mirabelle will be back – and look forward to her return.