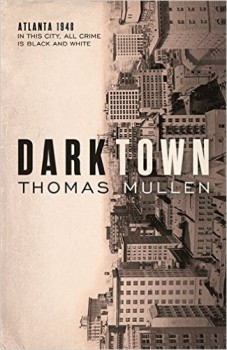 When a young black girl, last seen in the car of a white man, is found dead, new black Atlanta policemen Lucius Boggs and Tommy Smith go against the rules to investigate.

In booming post-war Atlanta, capital of the pre–civil rights South, Darktown is the wrong side of the tracks. It’s where the blacks are kept apart from white society, where poverty, social deprivation, bootleg liquor and brothels combine to produce lawlessness and casual violence.

In 1948, under pressure from Congress and a minority of educated blacks, mostly churchmen, Atlanta Police Department is forced to hire its first eight black officers. The new black police are strictly bound by the segregation, still the driving force of the Confederacy. Treated with deep hostility by their white peers, they are not allowed to arrest white suspects, drive squad cars, or set foot in the police headquarters. They are restricted to dealing only with their own people and have no authority at all outside Darktown an area riven by crime, institutionalised police brutality and corruption.

War veterans Lucius Boggs and Tommy Smith are two of the new black officers. They come from vastly different backgrounds. Boggs’ father is a minister. Educated and erudite, Boggs was considered unsuitable for combat because of his family’s attitudes. Smith, whose own World War One veteran father was lynched in rural Georgia, simply for wearing his uniform, is a war hardened, occasional reckless go-getter.

When a young black woman, last seen in a car driven by a white man, turns up dead, Boggs and Smith suspect white cops may be behind her death. Their undercover investigation – blacks are not allowed to examine possible white crime – brings them up against a brutal cop, Dunlow, who has long run the neighbourhood as his own, taking bribes and favours and brutalising local people at will.

Dunlow’s partner, Rakestraw, is a young progressive, who because of his German ancestry, has been exposed to the horror of the Nazi concentration camps. Sickened by his senior’s activities, he gradually becomes willing to make allies, if not friends, across colour lines.
Against a background of moonshiners, madams with knowledge they must keep hidden to survive, crooked policemen, and constant restrictions, Boggs and Smith risk their jobs and their lives, while trying to navigate a dangerous world that is on the verge of great change.

Mullen has produced an evocative, elegant and quite riveting procedural which could almost have come from today’s headlines. His skill at bringing America’s tortured past to life, both socially and visually, while at the same time delivering a message of hope as a reminder of the ties which cut across race, has never been better displayed. It is both deeply emotional and starkly realistic with characters who leap out of the page.

This socially resonant and morally complex literary thriller is a vivid, smart, intricately plotted saga exploring race, law enforcement, and the uneven scales of justice. It is a book to make you think.