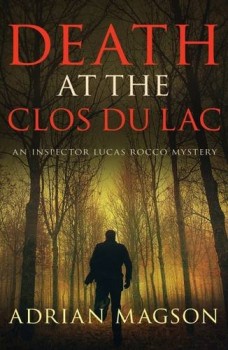 Death at the Clos du Lac

Inspector Lucas Rocco is called to an exclusive sanatorium, Clos du Lac. A man has been found dead in unusual circumstances, and when he arrives, Rocco realises that is something of an understatement. The dead man is at the bottom of a swimming pool, weighted down by a milk churn tied to his legs and tangled up in a contraption designed to help people swim. It certainly wasn’t an accident, and suicide seems unlikely.

Rocco becomes even more suspicious when shadowy types from Paris turn up and try to shoo him out of the door and away from any investigation with what seems positively indecent haste. But Rocco is never very good at doing what he’s told, and when a security guard from the Clos du Lac is found shot dead at his home, that gives him the perfect excuse to stay involved.

As ever with Adrian Magson’s thoroughly engaging series set in Picardie in northern France in 1964, there’s always more than one thing going on. In this case it’s the kidnapping of the wife of a politician involved in an important overseas trade deal. The two strands of the story run alongside each other and gradually start to converge. Rocco, who cut his teeth on police work in some of the rougher arrondissements of Paris, is now equally at home in the countryside, and the fruit rats in his attic are very rapidly turning into characters in their own right.

Rocco doesn’t take kindly to being kept in the dark, and he’s determined to get to the bottom of the real reason why men with assumed names are being kept in isolation at the Clos du Lac. His relationship with his superior officer, Francois Massin, is developing in interesting ways, and Massin seems to be coming out from under the shadow of their days together in military service in Indonesia. He’s a character I’d be very happy to see more of in future books.

If you haven’t been tempted by this series before, Death on the Clos du Lac would certainly provide a reasonable starting point, although I do very much recommend reading the earlier books in the series as well. Lucas Rocco has been described as France’s answer to Jack Reacher, a reference, no doubt, both to his stature and to his refusal to let anything stand in his way, and he’s definitely now my firm favourite amongst fictional French detectives. But I do hope that his creator doesn’t end up falling into the trap that seems to have enmeshed Martin Walker’s Bruno Courrèges with his love life now intrusively front and centre in the books. Rocco’s a detective, so let him carry on doing what he’s good at. These books are excellent police procedurals, well-grounded in both time and place. Let them stay that way.