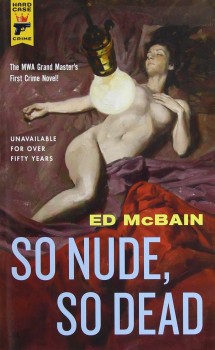 So Nude, So Dead

Former pianist and heroin addict Ray Stone wakes up in a cheap motel with a dead girl in his bed. The only way he can stop the police charging him with her murder is to find the real killer.

Ed McBain sold more than 100 million books in his lifetime – and this hardboiled piece of 1950s pulp fiction will show you exactly why. This story, first published more than 50 years ago, kicked off his glittering career and established his sharp, laconic style.

The main ingredients of any McBain novel are a fairly simple plot, huge pace and momentum, terrific dialogue and a strong sense of place. As an example of the ‘trashy’ fiction of its era, this book set a pattern for what was to follow. Lots of crime – in this case drugs – lots of bouncing from bed to bed and a general sense of despair and griminess.

The hero of his story is a heroin addict, and the classic warning of his progression from marijuana to cocaine seen through a series of flashbacks in which we meet his father, ex-wife and the bandmate who got him hooked, is years ahead of its time. McBain has clearly researched the effects of heroin and the agonies of the withdrawal symptoms and plays these with a sense of noir modern writers often lack. By the end, the reader will understand him for the louse he is, yet still feel sympathy with a thoroughly weak and reprehensible character.

Failed pianist and addict Ray Stone wakes up in a seedy hotel next to the corpse of a beautiful woman singer. She has been shot while both were in a heroin-induced stupor. What’s rather more important is that a large stash of H she was holding has disappeared.

Ray is prime suspect for the murder and – probably facing the electric chair because no one will believe an addict – must prove his innocence before the  police arrest him. His quest involves aggrieved relatives, nightclub sirens, muscle for hire, drug dealers and jazz musicians.

What lifts this out of the run-of-the-mill noir thriller is Ray’s addiction. He desperately needs a fix, but is without money and time is running out. If the cops don’t get him, the sheer physical strain of withdrawal might kill him. There is so much in this comparatively short novel. It is not just a drugs story; addiction is the vehicle by which Ray is separated from friends and family and serves to make him ever more desperate.

If you’ve not come across McBain before, read this. Yes, it’s dated. But it’s a brilliantly written, pacey, tough though at times surprisingly tender, old-style thriller. Real Pulp Fiction.

There is also a bonus – a short story featuring tough guy detective Matt Cordell, a McBain character who went on to his own series, an almost brutal tale that ties in well with the main theme.