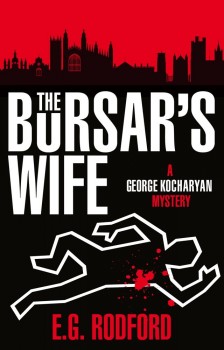 The wife of the bursar of Morley College seeks the assistance of George Kocharyan, Cambridge Confidential Services, to check on her daughter. What he finds turns out to be revealing about his own family.

George Kocharyan runs CCS investigations with the part-time assistance of teenager Jason and Jason’s mother Sandra, who provides office support as well as plenty of good advice. George is disconcerted when his report to a client about a misbehaving spouse is shortly followed by the murder of said spouse; the police demand his photographic evidence and charge his client with murder.

George is soon distracted, however. A new client, the attractive Sylvia, offers generous reward for following up her suspicions that her daughter Lucy has fallen in with a bad crowd. George finds that Lucy has been visiting Quentin Boyd, a contemporary of Sylvia’s, but by chance rescues her from danger and comes to doubt his initial guess that a sexual relationship was involved.

The case takes on an entirely new dimension when Sylvia’s husband, the bursar of Morley College, is found dead. George was brought up in the College precincts; his father, now mentally infirm, was a servant there, and retired early under puzzling circumstances. George’s investigations reveal connections between his cases, and generate some danger for himself, Jason and Lucy, before matters can be resolved.

E G Rodford, said to be the pseudonym of an award-winning author, has created here a worthy addition to the private eye genre, transplanted to contemporary Cambridge. George has the rather seedy and untidy office characteristic of the type, and a pushy personality which irritates the police and foes alike, earning him the occasional beating to be shrugged off with typical insouciance. A willingness to accept spiked drinks from suspicious characters has also been seen before, if not recommended.

His background, as a familiar of an Oxbridge college but of a different class to most of the occupants, provides the tang of conflict in his dealings with several members of the cast. George, Sandra and Jason find the good things in life a great deal harder to come by than do university academics, and Rodford seems to suggest they are all the better human beings for it. George spends considerable time sparring with another working-class character, the abrasive DI Stubbing. Few of the middle-class characters, by contrast, have much by way of redeeming qualities.

George tells the story in the first person, and keeps the reader pretty well informed as to his thinking, unlike some PIs who withhold large chunks of information for a final reveal. He thus comes across as a pretty straightforward character, and the plot makes more sense. There are touches of humour, and I can see this developing into a series; it is certainly readable enough.