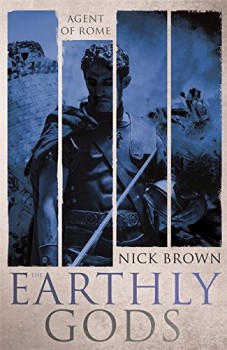 Imperial agent Cassius Corbulo has to help track down three kidnapped girls as well as continuing the search for his missing bodyguard.

This is the sixth outing for Cassius Quintius Corbulo in Nick Brown’s Agent of Rome series, but this is the first time I’ve made his acquaintance. Cassius is an officer of the Imperial Security Service in the Roman Empire in 273AD during the reign of the Emperor Aurelian.

He works under the direction of the shrewd but not overly likeable Aulus Abascantius and, when the story opens, Cassius is in Antioch, conducting a desperate search for his kidnapped bodyguard Indavara. Abascantius wants Cassius to concentrate on his duties but with Indavara missing, work is the last thing on the young agent’s mind.

His boss isn’t the only person who’s competing for Cassius’ attention. He’s been receiving – and ignoring – a series of letters from an old comrade, Kabir, a nomad chieftain who, three years earlier, helped Cassius out of a tight spot. Three girls from Kabir’s tribe have been kidnapped by slavers, including the chief’s own daughter. When Cassius finally talks to him, he finds it impossible to turn his back on his old comrade and strikes a bargain with him. He’ll help Kabir track down the missing girls in return for the nomad chieftain’s help in finding Indavara.

The bargain having been struck, Cassius braves Abascantius’ wrath by going absent without leave as he takes off on a quest across the length and breadth of the Middle East in search of the missing girls. Cassius is accompanied by Simo, his Christian slave, a donkey called Patch and a motley crew of Syrian nomads who are all an awful lot better in a fight than Cassius, including the donkey!

Cassius prefers to use his wits rather than his sword, and has become used to relying on Indavara to get him out of a tight spot. But Indavara has problems of his own. He’s been held captive, but has no idea why he’s been taken or what his captors want with him, but he knows he’s in deep trouble, especially when a surgeon arrives wielding a knife.

Brown does an excellent job of bringing the eastern end of the Roman Empire vividly to life. He’s especially strong when it comes to depicting the various army officers and soldiers Cassius comes across on his travels. The descriptions of the group’s travels through plague-ridden lands to a brutal open-cast salt mine where convicted prisoners are sent to work until they die are as vivid as they are horrific. Equally hard to read are the scenes in the brothel where the missing girls have been forced to work. TV has made much of the glories of the Roman empire, but there was a darker side to their world, which Brown exploits to the full.

Equally horrific is the reason why Indavara has been kidnapped. This unfolds gradually against the backdrop of the main story, while Cassius is desperately pursuing the missing girls. The two storylines mesh well together and as the climax started to unfold, I found I was reading faster and faster to find out what happened. It’s hard to avoid a comparison with the Empress of Roman crime, Lindsey Davis, but for me, Nick Brown holds his own in such exalted company.