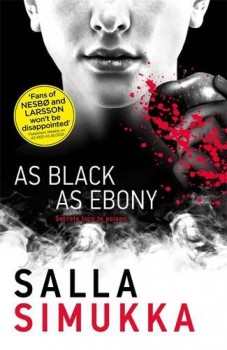 As Black as Ebony

Finnish teenager Lumikki Andersson is being stalked and doesn’t know to whom she can turn. She’s unable to decide between new boyfriend Sampsa, or Blaze, who broke her heart and has now reappeared in her life.

It’s unusual for me to stray into the realms of Scandi fiction, but I was drawn in by a YA trilogy from Hot Key Books, the young adult imprint of Bonnier Publishing, as everything I’ve so far read from them has been excellent. This was no exception.

Finnish teenager Lumikki Andersson is in her final year at college, living alone in a minimalistic flat, with little more than a mattress on the floor for a bed. In As Red As Blood, the first of Salla Simukka’s stylish, sensitive series, Lumikki is lucky to escape with her life after a dangerous brush with organised crime in her home town. The second, As White As Snow, sees Lumikki take a trip to Prague, where she meets a girl who claims to be her elder sister but, in Lumikki’s life, nothing is ever simple, and once again, she has to fight for her life.

In the final book in the trilogy, As Black As Ebony, Lumikki is doing her best to put the past behind her. She’s going out with Sampsa. He’s attractive and easy-going, but in her dreams, Lumikki longs for the touch of another boy. She spent a magical summer with Blaze but, as a consequence of his gender re-assignment surgery, Blaze distanced himself from her and, since then, Lumikki has been trying – unsuccessfully – to move on from him. In Sampsa, she thinks she’s found someone who can make her forget Blaze, but that’s not as easy as she hopes.

When strange threats start arriving, Lumikki is at a loss to know who is stalking her and threatening her friends, and she’s equally unsure who to turn to. But she’s no stranger to danger. In As Black As Ebony, Lumikki has to delve deeply into her own past, which turns out to be even darker than she has ever imagined.

The first thing to say is that Salla Simukka tells a damn good story. Each of the books quickly caught me up in the complexities of Lumikka’s life and character. She’s tough and self-reliant, clever and resourceful. She’s also extremely likeable. The plots in each of the books come together deftly, never straining credibility. I read them one after the other, happy to immerse myself in Lumikki’s life and loves. This series goes way beyond my standard Scandi review of snow, angst, trees, murder. Yes, there was plenty of all of these, but the series offers far more than just standard fare!