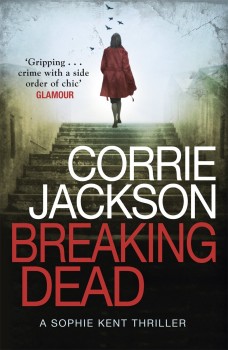 Journalist Sophie Kent finds herself entangled in the dark side of the fashion industry after a Russian model she’d just interviewed is found dead.

If you’re expecting wall-to-wall fashion world glamour, don’t read Breaking Dead. If you want an edgy tale from the noir end of the genre, this might be your brand.

I admit freely to being a sucker for hero journalist stories – and equally grumpy when writers haven’t done their media homework. You can’t accuse Corrie Jackson of the latter, given she’s worked on national papers and magazines.

Sophie Kent is a reporter on a London daily. A Russian model, who Sophie had interviewed just days before, is found dead in a snooty London hotel. There are more deaths to come, plus a vivid portrayal of an industry ridden with drugs, blackmail and dodgy sexual shenanigans.

Jackson presents a raft of fairly unlikeable characters, both on the newspaper and in the fashion world. But she’s a strong writer who makes the reader care what happens to these people. The fashion world is shown for what it is – superficially glamorous. Jackson has a convincing cast of models, photographers and agents, all with their secrets to hide.

Sophie has her own personal baggage in the form of a wealthy but dysfunctional family. She’s mourning the death of her drug addict brother – and this thread looks like being continued if this, as seems likely, turns into a series.

The newspaper scenes are as bleak and realistic as those in the fashion world. Sophie has appalling taste in men, not least the married news editor. And there’s the constant pressure of 24-hour news to keep the exclusives coming, set against the tumbling circulations of print newspapers. Sophie may be a maverick when it comes to the job, but she has the sense to involve her police contact, DCI Sam Durand.

Breaking Dead has the feel of a noir movie, with up-market hotels, seedy flats and the brightly-lit newsroom. It’s tightly-plotted, fast-moving and I devoured it greedily in two sittings.