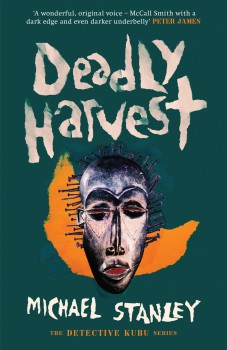 Samantha Khama, a new recruit to Botswana CID, takes the disappearance of young girls seriously, especially when it appears that they may be ending up in traditional medicine for those seeking power.

The disappearance of young girls is not normally something that stirs the interest of Botswana police. Newly-appointed Inspector Samantha Khana is better motivated, and suspects something sinister. Initially she makes little progress, but then an aspiring politician is murdered by the father of one of the missing girls, and is found to have muti, traditional African medicine, in his house.

Khana and her boss, the rotund Assistant Director Kubu, quickly identify the killer, although it takes them no further. When they are notified by the Big Mama Knows All shebeen that an albino immigrant has gone missing, however, a new avenue of enquiry opens up. A hint from a senior policeman also helps, and gives the pair enough to crack the case.

This is a police procedural with some unusual features, namely the setting and the nature of the crimes under investigation. Botswana CID, from what one can tell, is reasonably well resourced and has access to modern technology: forensic expertise and equipment for speedy DNA analysis. Neither is it lacking in investigative skills, although there are hints that corruption and politics can complicate matters.

The most unusual facet of local behaviour is the widespread belief in traditional medicine, which gives great influence to those who dispense it and potential for harm by those who misuse it. The more alarming manifestations of traditional medicine include the use of body parts of animals, or even humans, with characteristics which suggest to believers the possession of powers one may seek to acquire.

Into this unique background the authors (Michael Stanley is a composite of two collaborative writers) place as their protagonists Detective Kubu, star of several previous outings, and newcomer Khana. Kubu has the insight, despite his weight and insistence on the pre-eminence of mealtimes, and Khana has the drive, so the two make a good partnership. The narrative primarily stays with them, moving elsewhere infrequently to give information about the victims or their persecutors.

The story progresses briskly enough to maintain reader interest, and the two law officers are positive and resourceful enough to avoid frustrating pauses in progress. At the same time, the authors give sufficient detail about the behaviour of their targets to generate excitement about whether police efforts will be successful. The story is well paced, and culminates in a satisfying climax.