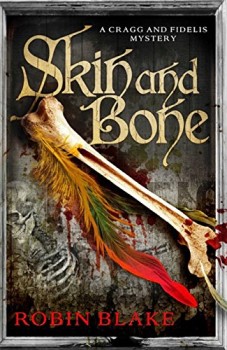 Preston Coroner Titus Cragg is called in when the body of a baby is discovered in the town’s notorious tanning yard.

Preston Coroner Titus Cragg is back in action again with his own version of Dr Watson, the young, up-and-coming doctor Luke Fidelis.

The body of a newborn baby has been discovered in one of the noxious leather tanning pits down on The Marsh, a low-lying area by the river Ribble where the tanners ply their trade. They are a close-kit community, preferring to remain apart, something which suits the rest of the town very well, as the foul odour of the pits clings to them like glue.

Concealing the death of a child is a capital crime in 1743, but if the baby can be determined to have been stillborn, then the sentence is not as severe. Dr Harrod, a man who likes to practice medicine by casting the horoscopes of his patients, seems happy to make that pronouncement but Luke Fidelis disagrees.

When the inquest into the death is disrupted by a serious fire, there’s a mad scramble to get out of the upper room of the inn, and afterwards, for Titus, life takes an abrupt and unexpected turn for the worst when he finds himself on the receiving end of an accusation that he acted lewdly towards one of the women present. There are plenty of people in Preston with scores to settle, and they are not slow to come out of the woodwork.

Robin Blake does an excellent job of transporting me back to the town where I grew up. Like the tanners, I lived by the banks of the river, not very far from the marshes Blake describes, and Marsh Lane still exists, as do many of the places described in the book. The sights and smells of the tannery are brought vividly to life, as is the rest of the town.

Titus Cragg provides as sympathetic narrator. He’s a man who’s concerned at all times with justice, not simply the letter of the law. Luke Fidelis is a harder man to sum up. He very much favours a scientific approach to the practice of medicine, and has no qualms at all about conducting invasive examinations of the corpses that come his way in the course of his association with Cragg. Despite that, he’s strangely finicky, but also prepared to take quite considerable financial risks, as he does when he gets drawn into the murky world of cock-fighting.

Skin and Bone is riveting, well-written and immaculately researched. Blake conjures up his period with the effortlessness that only comes from a deep knowledge of his subject. My only quibble this time is that the climax of the book descents rapidly into the trope beloved of all too many crime writers, namely the dreaded conversation between investigator and perpetrator where the latter happily lays out his actions and motivations in minute detail, just in case you missed any of the clues. I appreciate how hard it can be to ensure a plot unfolds fully, but I do wish writers would resist the temptation to take the easy way out and just have the villain ‘fess up his crimes. It really does make suspension of disbelief terminally difficult. But despite that, I’m still very happy to be transported back in time to the rich backdrop of skulduggery, politics and disorder in my home town.