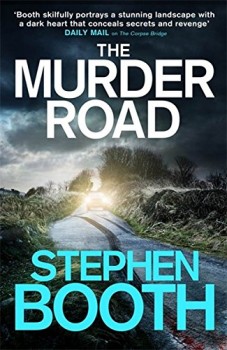 DI Ben Cooper investigates the murder of a lorry driver whose truck gets stuck under a low bridge near an isolated Derbyshire hamlet.

The Peak District hamlet of Shawhead is isolated at the best of times, but that’s only made worse when a lorry delivering animal feed to a farm gets stuck under a low bridge and blocks the narrow lane in and out of the village.

What first appears to be a simple case of a driver placing far too much reliance on a sat nav becomes more complicated when a local woman reports the stranded lorry to the police and tells them that the driver is nowhere to be seen and she’s found blood in the cab.

When the driver’s body is found nearby in a shallow grave, DI Ben Cooper is left to work out why someone would have wanted to kill Malcolm Kersey. Naturally, suspicion falls on the people closest to the incident, the inhabitants of Shawhead, a village that could easily have sported a sign proclaiming: “Welcome to Royston Vasey. You’ll never leave!”

As ever with Stephen Booth’s long-running series, the main character in the book is the county of Derbyshire, with its ever-changing landscape varying from dark, forbidding hills to the loose urban sprawl of towns like New Mills. The scenery and the weather take pride of place, coming close to crowding out the other characters. Ben Cooper takes centre stage in this book, with only a small appearance from Diane Fry, the other half of this detective duo. For me, Fry has always been the least interesting of the cops, and with her mostly off-stage, Cooper gets a better chance to shine.

The Murder Road moves along at a brisk pace, unlike the traffic on any of the motorways surrounding the area! Cooper has to work with a new DS, Dev Sharma, transferred over from another division. The relationship between the two is strained at times, with Cooper wondering about his new side-kick’s backstory and the partnership never quite gelling.

To unravel the story behind Malcolm Kelsey’s murder, Cooper has to uncover the truth about a fatal accident in the area eight years ago, digging up long-buried secrets in his search for the killer. If you’ve not read the rest of the series, that’s not a problem. Booth has a light hand when it comes to briefing the reader on any necessary background.

For me, the sense of place is always the thing I take away from the books, and The Murder Road broods with the best. This is a good, solid police procedural with an outstanding setting.