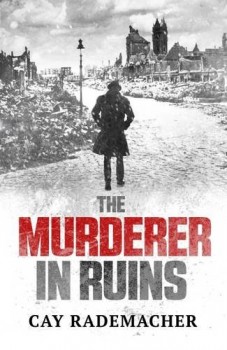 The Murderer in Ruins

The body of a young woman is found hidden behind a wall in the wartime rubble that used to be Hamburg. She has clearly been strangled but, that apart, there are no clues.

One needs to be of a certain age to remember just how bitterly cold the winter of 1947 was. People in the UK became accustomed to getting out of a warm bed into a freezing room and then going about their business in temperatures almost invariably below zero. In the land mass of northern Europe, however, conditions were even worse.

Nobody could remember a colder winter. The war had been over for 18 months but there was no relief for the citizens of Hamburg which was still in ruins following intense allied bombing. Many people had nowhere to live and found shelter in stinking, rat-infested wartime bunkers, cellars, random huts, or damaged buildings that had retained at least the remnants of a roof. Roads were still pitted with bomb craters and the pavements were obstructed by mounds of rubble. Each day saw more buildings collapse. There was little fuel for heating and what there was came at an exorbitant price. Street lighting was intermittent and it was dangerous to walk abroad after dark. Power cuts were an everyday event.

Virtually every commodity was rationed and the rationing system was so complex and bureaucratic that it was almost a joke. There was only one way to acquire items that were in short supply – via the thriving but dangerous black market.

This description of Hamburg in early 1947 is so realistic that it could almost be a documentary but the author makes excellent use of the historical background to produce a highly exciting thriller. Stave, its hero, seems to exist on black bread, cabbage soup and tea made from boiling water poured onto nettles.

In fact, the murders which Stave is investigating actually did occur in the city at this time. They were never solved, in spite of considerable efforts on the part of the police, but – known as ‘the rubble murders’ – they have remained in popular memory for over half a century. Rademacher has made use of them to weave a fascinating and (almost) always credible plot.

The bitter cold and the shortage of decent food are not the worst aspects of Stave’s life. He lives alone because his wife had been burnt to death in a bombing raid and his 17-year-old son had enlisted towards the end of the war, in spite of his father’s entreaties not to do so. Nothing has been heard of him since and Stave is beginning to believe that he is dead. These events have caused him to suffer from regular nightmares, during which the death of his wife and of murder victims somehow become merged.

His immediate superior, Cuddel Breuer, Chief of Hamburg Police, arranges for him to have help in the murder investigation of a young woman who had been strangled, stripped of all clothing and hidden in the city’s rubble. There is something about the murder that seems to suggest it is the first in a series and both the Hamburg and British Army authorities want the case cleared up quickly to avoid the possibility of panic in the civilian population.

The help that Breuer brings comes in the form of James MacDonald who is a young lieutenant in the British army, and a volunteer from the Vice Squad, Inspector Lothar Maschke. Even with the additional help, however, Stave finds it difficult to make any progress because it proves impossible to identify the body. Furthermore, when the fear of further, apparently similar, murders becomes a reality the same identity problem remains.

The efforts of Stave and his two assistants on the case seem to lead nowhere and the theories they advance become wilder and wilder as they search desperately for the perpetrator. In fact, it appears to become less and likely that he will ever be found when Stave discovers both his assistants behaving very strangely and begins to question whether they are to be trusted. Nevertheless, the untiring search for any clue to the identity of the victims finally pays off.

Both characters and plot are convincing, though belief has to be suspended to a certain extent when we learn how the victims came to be in Hamburg. Any quibbles the reader may have soon disappear, however, as the action begins to speed up and the killer is suddenly revealed in the ruins.