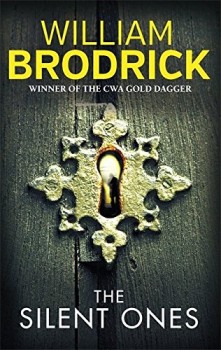 Father Anselm is approached by the head of a minor Order to trace a missing priest who ran from a police station while being questioned over an allegation of child abuse. Anselm finds he must again defend a man who is the only link to others who have chosen silence over their right to justice.

This strangely beautiful, but eminently disturbing, mystery for William Brodrick’s monk-detective Father Anselm shows exactly why the author won a CWA Gold Dagger and is the writer of choice for those who prefer a cerebral challenge with a moral and social message.

It tackles the topical and sensitive questions of child abuse by those in holy orders, their attempts to cover it up and – even more importantly – its long-term effects on the victims and their families. Brodrick, an Augustinian friar before leaving the Order to become a barrister and writer, faces these issues head on. He makes no attempt to excuse the Catholic authorities for their twin failures to either acknowledge or expose what has been a cancer at church’s heart, but at the same time celebrates through an eclectic – and often eccentric – cast the depth of humanity, decency and courage which a closed Order often hides.

There’s Anselm himself, an ex-barrister, bringing a clinical legal mind to the problems he faces; the bitter and devious Dunstan, a disgraced intelligence man once known as ‘The Weaver’; Sylvester, the aged gatekeeper, waiting for death but spinning out his knowledge and experience. Add to these a, for once, believable investigative journalist, struggling to come to terms with the loss of a father he adored, a massively uptight and secretive victim’s family and the confused young victim himself and you have the basis for a story which touches the reader’s soul.

Anselm is approached by the Provincial head of a minor Order to trace a missing priest, an American with a troubled past who has run from Boston, Sierra Leone and finally a London police station where he was being questioned after an allegation of abuse by a young boy.
Gradually he unpeels onion skin layers of revelation in a devastating exposure of a lifetime’s child abuse and comes to realise that not only is he being manipulated, but behind the victim there also stand the ranks of the Silent Ones – those who have chosen silence as a way to face their own horrors.

This intricate and moving story is another Brodrick’s impressive examinations of social issues through a detective novel, examining a horrible crime church, state and family try to hide in their own interests; a compelling tale of the anatomy of silence, the courage of victims and the redemptive power of justice.