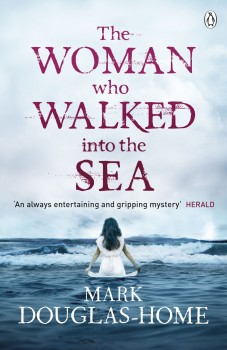 The Woman Who Walked Into The Sea

Violet Wells was abandoned as a baby. When she finds out that her mother committed suicide just after giving birth, Violet is determined to learn as much as she can about the woman who gave her up.

Violet Wells was abandoned as a new-born baby on the steps of a hospital, with nothing more than a knitted square and the flower brooch that gave her a name. She knows nothing of her background until a social worker brings her an anonymous letter purporting to reveal the details of Violet’s parentage.

Having grown up searching every crowd for the woman who might be her mother, Violet can’t resist the lure cast in front of her, even though she’s shocked and upset to learn that her mother took her own life by walking into the sea just after giving birth. Violet travels to a remote community on the north-west coast of Scotland, determined to uncover the truth about both her abandonment and her mother’s death.

Unsurprisingly, she’s met with a bunch of suspicious and in some cases downright hostile locals, some of whom could very easily successfully audition for a part in yet another re-make of The Wicker Man. The only sane one in the area seems to be oceanographer Cal McGill. He unwittingly ends up in the role of Violet’s protector, even though at first she doesn’t seem inclined even to give him the time of day, let alone tell him her name.

Violet comes up again opposition at every turn. The family from the ‘big house’ don’t want her rattling any skeletons in their cupboard. Cal finds himself equally unpopular when he’s caught in the middle of a row about a wind farm development that would radically alter the attractive coastline, whilst also bringing jobs and money to a depressed local economy that is currently almost wholly dependant on the tourist trade.

Cal and Violet are two strangers throw together by the antipathy that surrounds them. Violet hopes that Cal’s knowledge of tides, currents and winds can help her unravel the mystery surrounding her mother’s missing body and Cal isn’t very good at walking away from a puzzle concerning his beloved ocean.

Mark Douglas-Home has hit on an interesting and unusual theme for his ‘Sea Detective’ series, and has the knack of imparting information without resorting to information dumps. His depiction of a closed, hostile community is impressively claustrophobic, with a creeping sense of menace that builds gradually before making a rapid descent into a series of unexpected and unpleasant disclosures that caught me off-balance as I struggled to stay afloat in increasingly turbulent waters.

The Woman Who Walked Into The Sea can be read as a standalone, but equally, I enjoyed Cal McGill’s first appearance in The Sea Detective. Douglas-Home is a good storyteller who’s able to exploit his main character’s area of expertise to the full.