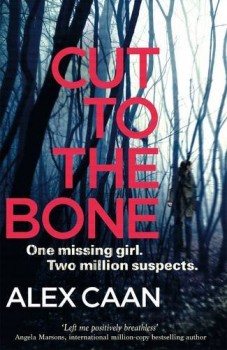 Cut To The Bone

DCI Kate Riley and DS Zain Harris find they have millions of suspects when a popular internet vlogger goes missing.

Ruby Day is an internet hit – a vlogger with a humungous following among teenage girls. So it’s instant news when she goes missing. Then the video is uploaded of Ruby begging for her life. And harrowing footage keeps coming.

DCI Kate Riley and DS Zain Harris are assigned the case. He’s the poster boy for multi-racial policing; she’s the up-and-coming star, but has so much personal baggage that it’s a miracle she can walk upright. And they don’t appear to have much in the way of support on the case, despite its high profile. I was never quite convinced by this new team they’re part of, supposedly reporting to the police crime commissioner, who is desperately ambitious.

Cut to the Bone focuses on a case where there are millions of suspects and no clue as to who has a grudge against Ruby. It’s a promising debut novel for Alex Caan, and he presents the reader with a switchback plot and a cast of dodgy and really rather unpleasant new media types, all of who deny having it in for Ruby.

It’s a dark tale that takes some very unexpected directions and where people are never quite as they seem. I guarantee you won’t guess the motive, although the jury is out on how convincing it is. Caan is also a touch heavy on genre tropes – mind you, he’s not the only debut novelist that can be said of – particularly when it comes to the police duo and their screwed-up past and murky present. In both cases, less would probably have been more with both Kate and Zain, particularly her rather distracting private life.

Cut to the Bone doesn’t really stand up to its title – it’s a touch on the baggy side, and could have taken a cut or two to tighten it up. But Caan tells a good story, there are some genuinely scary moments and it’ll make you think twice about social media.