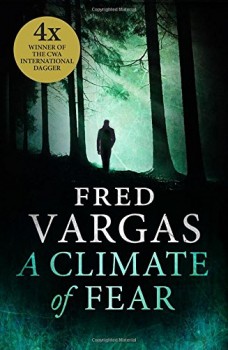 A Climate of Fear

A woman is thought to have committed suicide in her bath but Commissaire Adamsberg refuses to be convinced. Further apparent suicides, linked by the drawing of a strange symbol convince the investigating team that they are pursuing a serial killer.

Commissaire Adamsberg does not believe that Alice Gauthier committed suicide, despite no evidence to the contrary. A second suicide and a repeat of the curious symbol, drawn in blood, at the first suicide convince the police that a murder investigation is needed.

Adamsberg and his team of officers firstly discover an odd story regarding suspicious deaths on a remote island off Iceland ten years earlier and encounter a curious family who live in faded splendour in an estate in the country. Initially they are convinced that the murders are linked to these events. Further investigation leads them to a secret society who re-enact the meetings of Robespierre and others in his councils in the period of the French Revolution and the Terror.

This novel is beautifully crafted. The characters are all interesting, with quirky idiosyncrasies. The relationship between the members of the investigating team are delightfully portrayed with so much humour that they could almost become the cast of a sitcom. This is not in any way irritating; quite the contrary it is charming and amusing and enhances the understanding of their behaviours and interactions. Similarly the other characters are described visually and in terms of their characters, so clearly that one feels as if one has actually met them.

The translation from the original French is carried out quite literally so that the syntax retains its French quality, which reinforces the sense of place. It also gives the whole book something of the tone of old Tintin translations, with humour reminiscent of the Thompson twins. The use of short comments and apparently unnecessary retorts helps the reader to get into the mind of the main investigating officers.

The novel also created for me, a strong desire to visit Iceland, to see its strangeness and to meet the warm inhabitants and the wish to know much more about Robespierre and the French Revolution. Hilary Mantel’s A Place of Greater Safety is next on my reading list.

I hope that this book is taken up by Canal+ and made into one of those excellent French films.