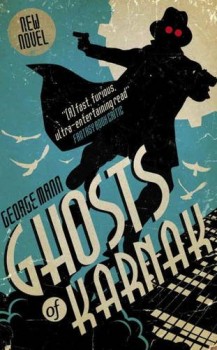 The vigilante known as the Ghost must take on some seemingly unstoppable man-machine hybrids and battle a mysterious cult determined to bring a pair of ancient Egyptian gods back to power.

It’s 1921, and the Metropolitan Museum of Art in Manhattan is about to host a major exhibition being brought over from Egypt. A newly-discovered temple, excavated from Karnak, is being recreated in the museum.

Meanwhile, a vicious gang war is being waged in the city between the forces of the criminal mastermind, the Reaper, and those of a strange and shadowy cult, dedicated to the worship of the Egyptian gods Thoth and Sekhmet. All that stands between them and the ordinary people of the city are Inspector Felix Donovan of the New York Police Department, his sidekick Sergeant Mullins and the vigilante known as the Ghost.

Few people know that behind the masked façade of the Ghost lies damaged war veteran and rich playboy, Gabriel Cross. At night, Cross becomes the Ghost, flying around the city with the aid of jet-boosters, armed with a lethal flechette gun. Think Captain America, but better dressed and wearing aviator goggles.

When the Ghost’s friend Ginny Gray fails to return when expected from an expedition of her own to Egypt, Cross is worried, and is determined to track her down. What he doesn’t realise is how far she’s become an unwitting and unwilling participant in the plans of the ruthless tomb raider, Jacques Amaury.

George Mann yet again effortlessly conjures up an entirely plausible alternate history for New York, where hybrid man-machines known as Enforcers walk the street at night, challenging the forces of law and order. Holophones take the place of telephones and airships still cruise the skies in a rollicking steampunk romp, in the same vein as Mann’s Newbury and Hobbes series.

Ghosts of Karnak is fast, fun and very clever. Despite its supernatural elements, the book is firmly grounded in reality by down-to-earth Sergeant Mullins and his boss, the deeply practical and very likeable Donovan, a man who knows that there are times when it’s necessary to do a deal with the devil for the greater good of the city he’s determined to protect.

I was also on the side of the long-suffering museum curator who hopes that the Ghost’s next adventure will end up with him trashing a different museum as a by-product of the action. He thinks it’s the turn of the Natural History Museum next and Gabriel Cross pitted against dinosaurs would definitely be a book worth reading!