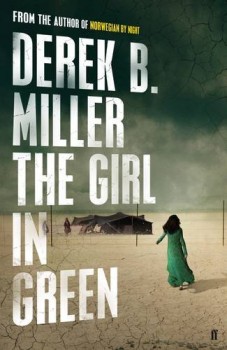 The Girl In Green

by Derek B. Miller

Journalist Thomas Benton is persuaded by ex-US soldier Arwood Hobbes to return to the Middle East to atone for their failure to save a girl in the aftermath of  Operation Desert Storm 20 years before.

Whether you can call this a crime novel is moot, because the crimes it describes are beyond belief or comprehension for most Western readers.

A hundred women shot for being “improperly” dressed, aid convoys ambushed and wiped out, tribal warfare at its most brutal, a mad dictator slaughtering thousands of his own people in a bid to re-establish control after military disaster. And that’s just scratching the surface of what in parts is a truly horrific story.

American academic and public policy specialist Derek B Miller sets his tale over 20 war-torn years from the aftermath of Desert Storm in Iraq to the present multi-sided civil war in Syria. His debut, Norwegian By Night, won the CWA John Creasey New Blood Dagger in 2013. Here, on the 25th anniversary of Desert Storm, he draws on his wide international experience to explore the troubled landscape of the Middle East, the West’s foreign policy agenda and pose a series of apparently unanswerable questions.

Unsuccessful, both professionally and personally, Times journalist Thomas Benton is persuaded by former American soldier Arwood Hobbes to embark on what seems a fools’ errand to atone for their failure to save a local girl 20 years before in the bloody aftermath of the first Gulf War. The girl’s exact double has featured in a TV clip of an attack on a refugee aid convoy, apparently by Kurdish Peshmerga fighters. Supported by Swedish relief worker Marta Strom and a variety of aid workers from several countries, they discover how confused life can be in the Middle East – and wind up in the hands of fighters for the rapidly expanding fanatics of the Islamic State.

Miller’s emotionally moving thriller looks at the mess the West has made and tries to put it in a clear, precise and telling context without over-simplifying. He cuts through the rhetoric and cynicism to harsh reality. His aid workers are no bleeding-heart liberals. They juggle relationships with mass murderers to prevent more murder. They lie and cheat, and play off different sides against other to try to stop more senseless death.

His main protagonists illustrate the problems the West faces. The pleasant, but ineffective and so-British drifter Benton, cannot sort out his own life, let alone that of others, while the slightly off-centre Hobbes, with his mixture of childishness, idealism, capitalism and frontier vengeance represents America at its best and worst.

While this story is full of conflict, it is also full of hope – even if some of that hope is as unrealistic as the ex-French intelligence officer’s dream that women can eventually solve any problem through love – conveyed in a page-turner that is funny, sad, and massively intelligent. If you’ve ever watched the TV news and thought ‘God, what is going on?’ this is an absolute must read from a writer who combines extreme talent with real compassion.

Miller, nor any of the gods invoked by the participants in the shambles that is Iraq and Syria, won’t offer you any answers. But at least you may come to understand the scope of the problems.