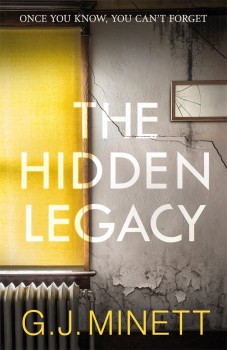 The death of one girl and the mutilation of another leaves a lasting and painful legacy that can’t remain buried for ever.

In 1966, 12-year-old John Michael Adams committed a horrific crime in the school playground when he flung petrol over two girls and then set fire to them. One girl died and the other was scarred for life. No one could understand his actions and even during his subsequent trial, the boy remained silent on the subject despite the media feeding frenzy which included accusations of parental abuse and mental health issues.

Moving forward by 11 years to 1974, and investigative journalist Andrew O’Halloran has succeeded in tracking down both John Michael Adams and his father, both now living under assumed names in different parts of the country. He hopes to bring them together with the father of the dead girl in a potentially explosive confrontation.

Intertwined with the above is the story of Ellen Sutherland’s unexpected inheritance. This strand of GM Minett’s darkly compelling look into how a crime of this nature continues to cast its long shadow down the years starts in 2008 with a letter to Ellen from a firm of solicitors concerning the estate of a woman she has no recollection of ever knowing.

This is the point in the book where, as a former property lawyer, I had to make a conscious effort to stay with the story, when it became clear that the words ‘grant of probate’ weren’t ever going to be mentioned. For the sake of the story, Minett seems to be working in a world where it’s possible to transfer property worth £775,000 into the name of a beneficiary just over a week after the funeral of the deceased, in this case a woman by the name of Eudora Nash, whose name means nothing to the beneficiary. If that was possible, my working life would have been made vastly easier on numerous occasions. But the author clearly isn’t going to let inconvenient facts get in the way of a good story.

And despite that major legal howler, The Hidden Legacy is a good story. I was equally drawn in my each layer and strand, trying to work out the connection between the dead woman and Ellen. As a main character, Ellen is likeable and intelligent and it’s certainly never wise to underestimate her. She’s determined to unravel the mystery of why Eudora Nash left Primrose Cottage to her, even though that quest means she ends up doubting the motives of even those people she’s closest too.

The book has uncomfortable parallels with the horrific murder of James Bulger, but I never felt at any time that the author was exploiting that tragedy for his own ends. This is certainly not a comfortable read, nor – I presume – is it intended to be. But it will force you to examine your own preconceptions and prejudices, which can never be a bad thing.

I did my best to pick up on any clues, and in that respect, Minett plays fair with the reader in his touching, painful and always intriguing story, but the denouement still managed to come as a surprise to me. The Hidden Legacy also contrived to leave me wanting to know what happens next in the lives of Ellen Sutherland and the troubled boy who set in motion a train of events that would continue to reverberate in the lives of others over 40 years later. And that is a good legacy for any book to leave.