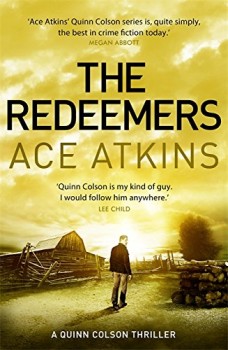 Sheriff Quinn Colson resigns, but still becomes involved when a burglary becomes complicated by the shooting of a deputy, and a battle to retrieve some very revealing financial records.

This is the latest episode from Tibbehah County, Mississippi, where Jericho sheriff Quinn Colson tries to keep a lid on malefactors in his parish. Colson has been voted out of office and is more than happy to take up one of the offers to return to work back in the Middle East, better paid if slightly more hazardous.

Before he gets the chance, however, he is asked to take an interest by the wife of lumber mill owner Larry Cobb when their house is damaged by thieves removing a large safe from the property. Those responsible shot and badly wounded a deputy escaping from arrest after the break-in, and Colson’s friend deputy Lillie Virgil is determined to make an early arrest.

In fact both Cobb and Lillie have a pretty good idea of the men responsible: two local boys Mickey and Kyle, both of whom have been claiming that Cobb owes them money. Mickey took good care to be out of town when the safe was taken; Kyle was assisted by Mickey’s distant relative Peewee and Chase, his ‘apprentice’. The four are as incompetent as they are nasty and arrest is only a matter of time.

More worrying, however, is the account book Cobb had in his safe, which in the wrong hands could mean jail time for local criminal Johnny Stagg and others on the wrong side of the law, including a senator. Colson ends up in mortal danger from a party of corrupt lawmen equally threatened and determined to put him down. Quinn needs to use all the skills he developed as a Ranger if he is to survive.

Tibbehah County is as ever redneck central, a poor and backward rural community where the best and worst of American society is on view. A small inflow of cash on rebuilding after a tornado devastated the centre of town is very welcome, although Stagg and those like him have been busily diverting this into their own pockets. The focus of the townsfolk is firmly on local events, and few glimpses of the outside world are seen.

The episodes involving the theft of the safe are very funny at times, for the sheer inaptitude of the perpetrators if nothing else. A certain amount of inbreeding is detectable amongst the folk that Colson and Virgil come into contact with; being sheriff calls for some horse-sense and bravery but no highly-developed detecting skills.

The last few Quinn Colson novels run close together in time and the ending of this latest instalment brings at least a pause as events give Colson some traction against Stagg, at long last. There is a hint at the end, however, that Stagg may be back in operation before too long, and Quinn may have to ride again in defence of the good folk of Jericho.