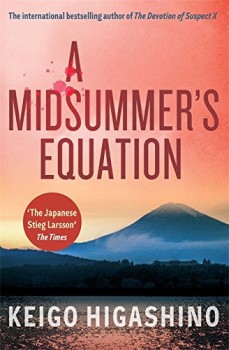 Retired Tokyo detective Tsukahara takes a trip to a quiet seaside resort and is found lifeless on the rocks the next morning. Professor Yukawa, another visitor, becomes involved as the background to the death is slowly unravelled.

Keigo Higashino has built a well-deserved reputation as the writer of convoluted murder mysteries, with Japanese settings that for Westerners add a hint of the exotic. His latest initially rather belies that description: the book opens with 12-year-old Kyohei and a physics professor Yukawa meeting on a train to the seaside, rather reminiscent of an adventure of the Famous Five.

However, the plot soon thickens. Yukawa and Kyohei are both on their way to Hari Cove, a resort in decline, where plans for underwater mining threaten the beauty of the offshore seabed and the precarious tourist trade. They both end up at the Green Rock Inn, which is run by Kyohei’s Aunt Setsuko and Uncle Shigohiro with the help of their daughter Narumi. The only other guest is Tsukahara, a former Tokyo detective.

When Tsukahara is found on the rocks with his skull broken the next day, an accident is suspected, but forensic examination shows the cause of death to have been carbon monoxide poisoning. Eventually Shigohiro confesses to having moved the body to the rocks after an accidental death from a misbehaving boiler at the Inn, but Yukawa is convinced this cannot be the full story.

Although employed as a physicist, Yukawa is friendly with a Tokyo policeman, and is known in some quarters as ‘Detective Galileo’. His observations of events at the Inn stir him to call for enquiries in Tokyo, and detectives there soon discover links to the murder of a nightclub hostess many years ago. That crime was supposedly solved and the culprit served time, but even after retirement the detective in charge, Tsukahara, took the fateful journey to Hari Cove in connection with the case.

Yukawa makes an interesting protagonist, being somewhat deficient in those courtesies expected of an educated Japanese man, but in keeping with expectations for a scientist who is more interested in how things work than social niceties. His bona fides were a little undermined by his suggestion to Kyohei that the area of a circle is its circumference times its radius, but maybe these things work differently in Japan.

Higashino displays his usual expertise in slow release of information so that the reader gets tantalising hints of hidden truths, only finally being privy to the complete story in the closing pages. The focus moves between the activities of the detectives in Tokyo, some acting on suggestions from Yukawa, to those of the local plods, one of which has fallen for Narumi, to the interaction of Yukawa and the boy Kyohei. Some of the parties have suspicions based on revealed facts, and readers who like to guess whodunit will find satisfying opportunities to exercise their skills.