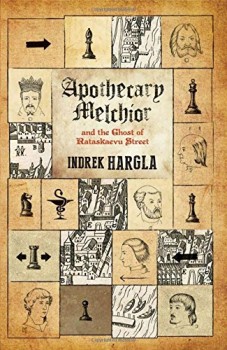 Apothecary Melchior and the Ghost of Rataskaevo Street

A prostitute, a Flemish painter and a tower watchman all die after claiming to see a ghost. Apothecary and assistant bailiff Melchior Wakenstede sets out to find the truth behind these seemingly supernatural, but unconnected, murders.

Indrek Hargla will be a new name to many British readers. This Estonian author has been picking up fans all over Europe, as his work, particularly the six-book Apothecary Melchior series, is widely translated. Judging by this – number two in a growing list – it’s easy to see why.

In the early 15th century Tallinn, when Estonia was at the furthest edge of Christian lands and Rome’s last foothold before the barbaric East, Hargla has already chosen a setting where you can believe anything could happen.

The northernmost member of the Hanseatic League – a mercantile and military alliance of German-dominated cities in Northern Europe – Tallinn was sold by the Danes to the Teutonic Order. With its strategic position at the trading crossroads between Western and Northern Europe and Russia, the port city, with a population of 8,000, was well fortified and protected its semi-independence vigorously.

The city comes alive, its people are real and easy to relate to as Hargla spins a complex plot. What links the deaths of a whore, a Flemish painter and a tower watchman to an allegedly haunted house on the street where Melchior Wakenstede, apothecary and assistant bailiff, lives? Each was found in mysterious circumstances soon after claiming to have seen a ghost near the house.

Superstition and stories of past dark deeds leads to some attributing the deaths to supernatural events. But when a powerful and intensely pious merchant dies, along with a castrated and disfigured tramp, Melchior senses a more human connection. His investigation is complicated by the competing interests of merchant guilds, religious orders and Teutonic knights.

Period, place, people and plot are beautifully captured and the translation from the original Estonian is clever, combining the factual depictions and accuracies of CJ Sansom with the hard-nosed prose of Bernard Cornwell.

Melchior himself is a compelling character. Logical, traditionally Germanic and a ruthless investigator, he is also a doting family man, struggling to make a future for his wife and children. A sufferer from some form of seizures, as a detective he is also capable of flashes of brilliance to rival Holmes or Poirot. The almost stage-set dénouement is pure Christie.

It is easy, as some reviewers have done, to make comparisons with Brother Cadfael. That’s unfair to both, but Melchior is least as entertaining as Ellis Peters’ monkish crime-solver.

Almost everything about this book is right. The only problem was the typeface and occasional proofing errors. We’re going to hear a lot more from Hargla – and a planned film set in the beautiful medieval city should be quite spectacular!