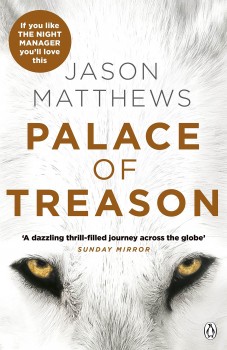 A member of the Russian Intelligence Service, Dominika Egorova, has been turned by a CIA man on a mission to the United States. She is given the task of returning to Moscow to act as a CIA mole.

The author, Jason Matthews, spent 33 years as a CIA officer, the experience gained enabling him to write very knowledgably about it. However CIA regulations imposed a limit on the information he could provide and when the draft of the novel was submitted to his former employers they insisted on removing about a quarter of it and changing the ending. We begin to see why as we read the book and assimilate the detail, particularly the tradecraft that pervades it.

Never for one moment do we doubt that Dominika Egorova is a turned Russian spy and Marty Gable and Nate Nash highly trained officers in a secret organisation, always on the lookout for an opportunity to turn a situation to their advantage. This realism is particularly evident in the numerous occasions on which suspicious characters have to be followed and their behaviour observed without their being aware of it. The detail given of exactly how this has to take place are so intriguing and surprising to the reader that, however often such incidents occur, they are never dull.

Captain Dominika Egorova was originally a member of the Russian Intelligence Service who, on a mission to the United States, has been persuaded by Nate to work for the CIA. She is easily convinced to do so because she loathes Putin and the thugs and crooked oligarchs who serve him.

When the novel begins she is back in Moscow, now working for the CIA with a brief to penetrate the secrets of the Kremlin - the ‘Palace of Treason’. Nate Nash acts as her handler. Her immediate superior, Zyuganov, is hugely ambitious and sees her as a threat to that ambition, particularly when she finds favour with Putin himself. She knows that he would show no mercy were he to discover her new allegiance and has to be constantly on her guard.

Dominika is a totally fascinating character as she avoids an assassination attempt and then becomes involved in trying to smuggle a Russian mole out of the country and into the United States. In this she is ably assisted by Nate, with whom she is deeply in love, as he is with her – an affair that adds to the reader’s fascination with her.

They are not, however, the only well-drawn characters. The cynical Gable, Nate’s more experienced associate, is totally convincing as he tries to advise the younger man, particularly about the possible danger inherent in becoming romantically entangled with Egorova. Benford, the head of the division, always has the interests of the service at heart and is completely trusted by his subordinates. A career in the secret services is not unlike a career in the workaday world in that it is always sweetened by advancement.

Two of the characters in the novel, Zyuganov and Angevine, become embittered when promotion is not forthcoming and react in different ways, both of which are entirely convincing. Perhaps both should have been aware, as the author puts it, that there is no limit to the obsequiousness which needs to be shown to superiors.

The plot itself is always convincing, although, with traitors on both sides, complex. One event seems to lead naturally to another and the reader becomes absorbed in trying to work out how the latest change of fortune can be dealt with. The way in which all the main characters are drawn to the same place towards the end of the novel is very skilfully done and the subsequent climax completely gripping.

There are, perhaps, one or two minor quibbles. At well over 500 pages the book is rather too long and could easily have been shortened without losing anything of consequence. What, for example is the point of Gable’s romantic dalliance? There is also too much use of initials to denote obscure organisations. No doubt they exist, but the reader who tries to keep track of them will soon find himself lost. The author needs to be aware that the novel itself is much more important than any rigid representation of CIA structure. Le Carre provided proof of this in writing Cold War novels in which the terms ‘Moscow Centre’ and ‘The Circus’ were all that was required.

Also rather annoying is the constant use of a Russian word followed by its translation, presumably in an attempt to impart local colour, but which succeeds only in reminding us that Russians speak Russian. The author seems also to be singularly interested in food and ends every chapter with a recipe, the effect of which might well be to put readers off Russian food for ever.

These, however, are minor flaws in what is a very accomplished novel, containing in Egorova a heroine whom we remember long after we have finished it.